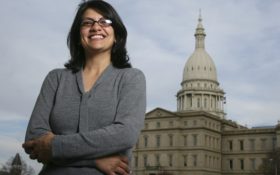 Senate Republicans’ first bill of the new Congress aims to insert the legislative branch into President Donald Trump’s Middle East policy — and it has revealed the ugly truth behind one of the newest Democratic lawmakers to take office.

Just one week after a nasty, profanity-laced rant against President Donald Trump during his first speech as a congresswoman, Michigan Rep. Rahida Tlaib, Democrat, is back at it again.

But far-left Democrats are furious over Republican Sen. Marco Rubio’s “Combatting BDS Act” inclusion, which seeks to counter the global Boycott, Divest and Sanctions movement against Israel over its treatment of Palestinians and the settlements.

Tlaib, a Muslim congresswoman, went on Twitter to suggest that Jewish Republicans were only loyal to Israel — not the United States of America.

They forgot what country they represent. This is the U.S. where boycotting is a right & part of our historical fight for freedom & equality. Maybe a refresher on our U.S. Constitution is in order, then get back to opening up our government instead of taking our rights away. https://t.co/KkmqjR58ZM

For now, the package will almost certainly stall. The bill comes amid the partial government shutdown, and Democrats say they will block it until government is reopened.

Senate Minority Leader Chuck Schumer will oppose proceeding to the legislation, according to a senior aide who was unauthorized to speak publicly about the vote and spoke on condition of anonymity. Other Democratic senators who also support the bills will likely follow suit.

Israel sees a growing threat from the BDS movement, which has led to increased boycotts of the Jewish state in support of the Palestinians. A Woodstock-style concert was canceled and some companies stopped offering services in the West Bank settlements. That has led to a “boycott of the boycotts” as Israel pushes back against those aligned with BDS.

In support of Israel, Rubio’s bills would affirm the legal authority of state and local governments to restrict contracts and take other actions against those “engaged in BDS conduct.” Several states are facing lawsuits after taking action against workers supporting BDS boycotts of Israel.

Rubio said Monday in a series of tweets, including one pointed at Tlaib, called her post an “anti-Semitic line” that pushes a “dual loyalty” conspiracy theory that Israel (and Jews) effectively control America’s politicians.

Both sides are squaring off ahead of Tuesday’s votes.

“Any contention that the bill infringes upon First Amendment rights is simply wrong,” said Jewish leader Marshall Wittman. “It ensures Israel has the means necessary to defend itself — by itself — against growing threats and helps protect the right of states to counter boycotts against Israel.”