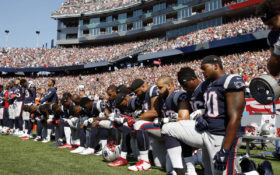 The scandal-plagued NFL is taking more heat after allegations that one team practically abused its cheerleaders, making them undress is questionable circumstances while creepy corporate sponsors slobbered over them.

The New York Times said the Washington Redskins took the cheerleaders on a trip to Costa Rica in 2013 allegedly for a photoshoot.

When they arrived at the adults-only Occidental Grand Papagayo resort, their passports were taken by the team.

Some of the girls were made to strip and put on body paint for what was supposed to be a calendar shoot while sponsors and suite holders – all men – were invited to watch up-close and leer, the Times reported.

Then, after the photoshoot, nine of the cheerleaders were “selected” by the sponsors to escort them to a nightclub that evening.

“They weren’t putting a gun to our heads, but it was mandatory for us to go,” one unnamed cheerleader told the newspaper. “We weren’t asked, we were told. Other girls were devastated because we knew exactly what she was doing.”

There are no allegations of sexual misconduct, but one cheerleader told the Times they felt “pimped” by the team.

“It’s just not right to send cheerleaders out with strange men when some of the girls clearly don’t want to go,” a cheerleader was quoted as saying. “But unfortunately, I feel like it won’t change until something terrible happens, like a girl is assaulted in some way, or raped. I think teams will start paying attention to this only when it’s too late.”

The team has said little, but told WJLA that “each Redskins cheerleader is contractually protected to ensure a safe and constructive environment.”

The report is just the latest in a string of embarrassments for the once-beloved league.

Cheerleaders throughout the NFL have accused teams of being cheapskates, paying them as little as $1,000 a year for these demanding high-visibility roles, and in some cases not paying them at all for rehearsals and promotional appearances.

Some claim they were earning less than $2 an hour!

The league has also been busted trying to hide the evidence of the traumatic and permanent brain injuries suffered by top athletes.

Instead of taking action and protecting players, the NFL denied the risk and allegedly worked to undermine the research that ultimately exposed it.

And, of course, the league last year refused to take action against players who abused their privileges as top athletes by using their national TV exposure to protest the police, the military and President Donald Trump.

Ratings have been in absolute free-fall, plummeting by 10 percent this past season – the kind of drop rarely seen even in an age when more people are watching online rather than on TV.

More alarming for the NFL is that its marquee matchups – the ones that traditionally draw the biggest national audiences – have also decline dramatically.

In 2016, when the kneeling protests began, viewers showed their disgust by tuning out, with just three games hitting that target.

In 2017, as protests spread and President Trump called out the players who disrespected the flag, just one game – a late-season match-up between the Steelers and Patriots – reached that 15.0 rating.

Now, it looks like the league isn’t just disrespecting the players… the anthem… the military… the police… and the public.

They’re mistreating women, too – and in the era of “Me Too,” that will no doubt cause ratings to plunge even further.