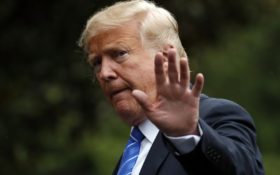 Explosive polls show that Americans don’t trust the media to give them the straight story – and they’re right: The Big Three networks’ massive bias against President Donald Trump has hit its worst level ever.

The proof is in a new study by the Media Research Center – and it’s ugly.

Researchers watched every single one of the 1,007 stories aired on the evening news this summer about the president.

Guess how many of their Trump stories were negative? More than nine in 10 – the worst level so far!

They found 92 percent of all coverage of the president on ABC, NBC, and CBS “News” slammed the administration.

That means from June 1 to September 30, the legacy media did a total of 1,803 minutes of Trump-bashing!

The media just keep sinking to new lows, even while Trump – and the United States – keeps reaching new highs.

During this time, the president’s approval ratings kept rising and broke not one but two records. Unemployment fell to its lowest rate since 1969. And workers’ paychecks started to rise more than they had since the beginning of the recession 10 years – and two failed presidents – ago.

How much time did the three networks spend on this history-making economic progress? 14 minutes.

That’s a measly 0.7 percent of their coverage of the Trump administration.

But they mixed things up a little – by trashing newly confirmed Supreme Court Justice Brett Kavanaugh.

The media hates the president, and it colors the stories they choose to report and how they try to spin them to their declining number of viewers.

As bad as this report looks, the fake news bias is actually worse: This study doesn’t include CNN, MSNBC, or any of the late-night shows.

The survey only measured through the end of September – but media lies and slanted coverage has only gotten worse, and more outrageous, since then.

The Peacock network later had to rush out this embarrassing retraction —

CORRECTION: An earlier tweet misidentified the general President Trump described as "incredible" at a rally in Ohio. It was Gen. Ulysses S. Grant, not Gen. Robert E. Lee. An attached video clip lacked the full context for Trump's remark. Here is the full clip. pic.twitter.com/NZHj3Q2dHL

No wonder more than three-out-of-four Americans said they believe the mainstream media and network talking heads sell “fake news,” according to a Monmouth University poll conducted earlier this year.

Media approval ratings just keep plunging, dipping down to 33 percent in January… and it’s a miracle it’s that high.

Most Americans – of all political backgrounds – say they don’t believe a word the legacy news networks report.

What’s more, 79 percent of independents – and 53 percent of Democrats – agree with them, according to a poll released in June by the left-wing website Axios and SurveyMonkey.

With numbers like that, it’s also no wonder most Americans say they visit “internet-only news websites” – like The Horn News – on “a frequent basis.” And 57 percent of them say the internet has had “a positive impact on the U.S. news environment in the past ten years,” according to a Gallup poll.

We’re doing the job the media used to do: Reporting the facts and telling the truth.