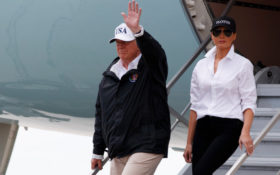 Remember how the liberal media put politics aside and rallied around President George W. Bush during Hurricane Katrina?

Of course you don’t. It never happened. They slammed him – rightly – for a badly botched response to the storm and its aftermath.

Yet in the latest example of open hostility to anything and everything President Donald Trump has done, they’re pretending the Bush team somehow set the standard for disaster response.

They even had the nerve to get former Bush spokesman Ari Fleischer to lecture Trump on everything he’s supposedly doing wrong, saying in a Fox News interview that the president lacks “empathy” for storm victims.

Want to see a lack of empathy? How about Bush’s infamous comments to then-FEMA chief Michael D. Brown.

“Brownie, you’re doing a heckuva a job,” he said as the Katrina relief effort crumbled before his eyes.

The most memorable image of the storm isn’t Bush directing the relief effort, as Trump has done. It’s of him impotently circling in Air Force One, viewing the damage above as FEMA failed on the ground.

Trump is supposed to take advice from THOSE people?

He’s clearly taking the opposite approach, on purpose.

After confirming that rescue and relief efforts were under way, he offered cautious praise for his team.

No “heckuva job” here, but a supportive pat on the back from the president as well as a firm-but-gentle reminder that the real work is to come.

Yet he’s STILL getting blasted by the media.

Even the White House pool report – which is supposed to be an objective statement of facts about what the president has done – couldn’t resist getting in some digs at Trump.

“Reporters heard no mention of the dead, dying or displaced Texans and no expression of sympathy for them,” the account reads. “The message was services are coming and Texans will be OK.”

Leaving aside the basic fact that that Trump has repeatedly expressed sympathy for the victims of the storm, what precisely is wrong with that message?

“Texans can handle anything,” the president said at that event. “We are going to get you back and operating immediately.”

That’s at once a message of hope and support combined with a vow of the kind of action Bush failed to deliver on.

Even Trump’s decision NOT to meet storm victims had a perfectly good reason behind it: Bringing the president into a disaster zone is a logistical and security nightmare that could end up pulling precious resources away from helping survivors.

“The president wants to be very cautious about making sure that any activity doesn’t disrupt any of the recovery efforts,” Press Secretary Sarah Huckabee Sanders told reporters. “I don’t know that we will be able to get to some of the really damaged areas.”

If Ari Fleischer and the left-wing media want an example of how a disaster should be handled, he should look no further than a president who refused to turn human suffering into a photo op for political points.

That’s empathy by any definition.