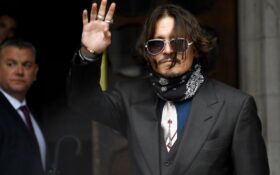 Johnny Depp denied hitting ex-wife Amber Heard in a jealous rage, as he was cross-examined Wednesday by a lawyer for British tabloid The Sun in a London courtroom. The newspaper is defending a libel claim after calling the Hollywood star a “wife beater.”

Depp is suing The Sun’s publisher, News Group Newspapers, and its executive editor, Dan Wootton, over an April 2018 article that said he had physically abused Heard.

The case opened Tuesday at the High Court in London, with Depp sitting in the witness box and denying Heard’s allegations that he assaulted her on multiple occasions.

The “Pirates of the Caribbean” star said Heard’s “sick” claims were “totally untrue.” He called his ex-wife sociopathic, narcissistic and emotionally dishonest.

While Heard isn’t on trial, the case is a showdown between the former spouses, who accuse each other of being controlling, violent and deceitful during their tempestuous marriage.

The Sun’s defense relies on Heard’s allegations of 14 incidents of violence by Depp between 2013 and 2016, in locations including Los Angeles, Australia, Japan, the Bahamas and a chartered jet. He denies them all and says Heard, an actress and model, attacked him with items including a drink can and a cigarette, and severed his finger by throwing a vodka bottle at him.

Cross-examining Depp, The Sun’s lawyer, Sasha Wass, recounted an allegation of abuse that Heard says took place at her home in March 2013. She said Depp became enraged at a painting by Heard’s former partner, artist Tasya Van Ree, that hung in Heard’s bedroom.

Depp acknowledged that he “could be jealous” but denied Heard’s claim that he took the painting off the wall, tried to set it on fire and slapped Heard when she intervened.

“I did not hit Ms. Heard and furthermore I have never hit Ms. Heard,” said Depp, who wore a gray suit, blue shirt and patterned tie for his court appearance.

He also denied hitting Heard after she laughed at a tattoo he had that read “Wino Forever.” He said he’d had it altered from “Winona Forever” after he split up with actress Winona Ryder years earlier.

“I don’t recall any argument about any of my tattoos,” Depp said.

Depp rejected every allegation of violence put to him by Wass, dismissing the claims as “not correct” and “patently untrue.”

He denied the lawyer’s suggestion that his memory had been impaired by alcohol and drug abuse.

Wass has tried to paint Depp as a volatile personality with a longstanding drug habit and an anger-management problem.

Depp has acknowledged taking both prescription and illegal substances since childhood, but denied Heard’s clam he became a “monster” when he drank and took drugs.

“I was angry, but that doesn’t mean I have an anger problem,” Depp said Tuesday. “I also express myself by laughing. I don’t have a humor problem.”

Depp and Wass also clashed over whether Heard had tried to curb his drinking and drug use. Heard claims she tried to support Depp to become sober and never took cocaine during their relationship.

“There were many times in our relationship, early on, where not only did she chop the cocaine with a razor blade into lines, she would then take the cocaine on her finger and rub it on her gums,” Depp said.

Heard is attending court and is expected to give evidence later in the trial, which is scheduled to last three weeks.