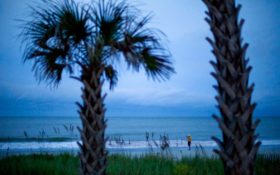 Random lights caught on camera flying over Myrtle Beach are raising questions about where they came from — and if they could possibly be from another planet.

A time-lapse video from Aug. 5 was posted to a UFO sighting website and appears to show a series of lights hovering in the sky over the beach town.

The video was originally taken to catch a storm that was coming in and the user had not noticed anything unusual in the sky… that was until they took a closer look at home.

See the video below —

The person who submitted the video to the UFO Stalker website said, “I was taking the pictures off the edge of a long pier after dark, so there were no reflective surfaces around.”

“I did not notice the objects until i returned home and checked the photograph and video,” the person wrote.

The unusual video was also posted to YouTube with the description, “A MASSIVE ‘spaceship’ was spotted apparently hovering over a beach during a thunderstorm.”

The video was originally shot on Aug. 5, but was not uploaded until Oct. 4, 59 days later.