U.S. to intensify counter-ISIS operations in Afghanistan - The Horn News 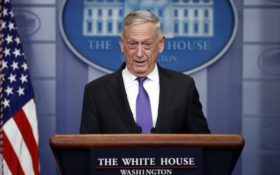 The Afghan government’s unilateral halt to attacks on the Taliban is giving U.S. counterterrorism forces a chance to intensify combat operations against Islamic State-affiliated extremists in eastern Afghanistan, the top U.S. general in Kabul said Friday.

Army Gen. John Nicholson, speaking to reporters on the sidelines of a meeting of NATO defense ministers, said the fight against IS in the southern part of Nangarhar province had already been intensifying this year and would be further stepped up during the ceasefire, which does not apply to non-Taliban opposition groups.

Nicholson, who was attending the NATO meeting to provide updates on the war in Afghanistan, said he could not predict whether the Taliban will join the cease-fire announced this week by President Ashraf Ghani. He expressed no concern that a unilateral cease-fire would give the Taliban breathing room to regroup and rearm.

“The potential benefit is greater than the risk,” he said, expressing hope that what Ghani called a week-long pause could lead to something more substantial and improve prospects for actual peace negotiations. The Taliban has insisted that it would negotiate only with Washington, but the U.S. insists that it talk to the Afghan government.

Whether it remains a unilateral action or not, U.S. forces will remain prepared to respond to any Taliban attacks, Nicholson said. The U.S. has about 8,400 troops performing non-combat support for Afghan security forces fighting the Taliban; separately, several thousand U.S. combat troops are fighting al-Qaida and IS-affiliated groups.

Nicholson said the cease-fire announced Thursday coincides with stepped up U.S. counterterrorism efforts in the east.

“These will continue, in fact will be intensified during this period of cease-fire,” he said in an interview with a small group of reporters traveling with Defense Secretary Jim Mattis. Nicholson said operations in Nangarhar this year have succeeded in squeezing the space in which the IS-affiliated fighters there have room to operate.

The general said the international financial network that supports the IS-affiliates in Afghanistan have been “degraded” in the period since IS in Syria has been largely dismantled.

Nicholson, who has commanded the U.S.-led military coalition in Afghanistan since March 2016, spoke with measured optimism about prospects for compelling the Taliban to enter peace negotiations with the Afghan government.

U.S. officials have talked up the prospects for peace many times over the course of the 17-year war in Afghanistan, only to be disappointed. When President Donald Trump announced last August that he was committed to winning the war with a revamped strategy, he said the goal was to compel the Taliban — with help from Pakistan and other interested nations — to seek peace.

“I do think the policy is working. It just needs more time,” he said.

Nicholson acknowledged that the war is complicated by the involvement of other outside powers, including Russia, which has said it became involved out of concern that IS-affiliated groups there will spread to other parts of Central Asia.

“We are concerned about any external enablement (of the Taliban),” he said. “We do believe that the Russians have increased this kind of activity.” He characterized this as “small-scale support” for the insurgency.