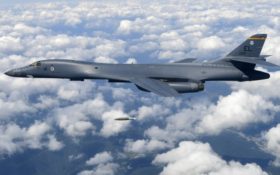 The U.S. military flew advanced bombers and stealth jets over the Korean Peninsula and near Japan in drills with South Korean and Japanese warplanes on Monday, three days after North Korea fired a missile over Japan.

The United States often sends powerful military aircraft in a show of force in times of heightened animosities with North Korea. The North launched its latest missile as it protested against tough new U.N. sanctions over its sixth nuclear test on Sept. 3.

The U.S. warplanes also conducted formation training with Japanese fighter jets over waters near the southern island of Kyushu, according to the Pacific Command.

Since Kim Jong Un took power in North Korea in late 2011, his nation has tested weapons at a torrid pace. The country flight-tested two intercontinental ballistic missiles in July. Its nuclear test in September was its most powerful to date.

Many experts say it’s only a matter of time until Kim achieves his stated objective of possessing reliable nuclear-tipped missiles capable of striking anywhere in the mainland U.S.

State media on Saturday quoted Kim as saying that North Korea’s final goal “is to establish the equilibrium of real force with the U.S. and make the U.S. rulers dare not talk about military option” for the North.

Alarmed by North Korea’s advancing weapons programs, many conservatives in South Korea have called for the reintroduction of U.S. tactical nuclear weapons in the South. But the liberal-leaning government of President Moon Jae-in said it has no intention of requesting that the U.S. bring back such weapons.

South Korean Defense Minister Song Young-moo told lawmakers on Monday that it is “not proper” to reintroduce U.S. nuclear weapons. He previously said the idea should be “deeply considered” by the allies, inflaming already-heated debate on the issue.

“The so-called ‘China’s responsibility theory’ is essentially moral kidnapping,” the People’s Daily said in a commentary. It also noted that sanctions should not harm “legitimate economic and trade exchanges between North Korea and the outside world” and the lives of everyday people.

China accounts for about 90 percent of North Korea’s trade and sends largely free crude oil shipments to the North. Beijing has been increasingly frustrated with North Korea’s nuclear drive, but it still doesn’t want the North to collapse and cause a wave of refugees to cross the border into China and American troops to move into North Korea.

China’s foreign ministry said Monday that military threats being made by North Korea and the U.S. were counterproductive.

“Some related parties keep sending threatening messages both in words and deeds that include warnings of military actions to each other,” ministry spokesman Lu Kang told reporters at a regular briefing. “But actually, these kinds of actions didn’t help solving the problem but further complicate the situation, which do no good to the resolution of the peninsular issue.”

Instead, he said, the international community should strictly implement the sanctions imposed on North Korea by the U.N. Security Council.

German Foreign Minister Sigmar Gabriel also said in comments reported Monday by the Bild daily that the world should wait for the sanctions to bite, but that “visions and courageous steps” such as direct negotiations with North Korea are also needed.