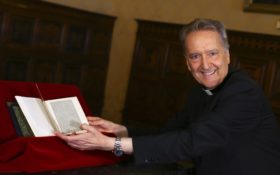 The United States returned to the Vatican Library Thursday a rare copy of a letter written by Christopher Columbus in 1493 announcing his discovery of the New World that was stolen and replaced with a forgery.

It’s the third such return in recent years after U.S. investigators, tipped off by a rare books expert, determined that several authentic copies of the Columbus letter had been stolen from libraries across Europe and replaced with forgeries without library officials’ knowledge.

U.S. Ambassador Callista Gingrich presented the letter to the chief Vatican archivist, Archbishop Jean-Louis Brugues, and the prefect of the library, Bishop Cesare Pasini, at a ceremony in the Vatican library. Both monsignors thanked U.S. investigators for what Bruges said was their “keen eye and fine detective work” in locating the document.

The letter came from Mary Parsons, the widow of David Parsons, an Atlanta actuary who purchased it from a rare book dealer in New York in 2004, unaware it had been stolen from the Vatican.

The 8-page text, handwritten and copied by hand in Latin, conveys Columbus’ marvel at the fertile islands he found, “full of the greatest variety of trees reaching to the stars,” and the timid natives who Columbus believed were ripe for conquest by Spain and conversion to Christianity.

The letter is one of a few dozen authentic, reprinted copies of Columbus’ original letter, which was handwritten in Spanish in April 1493 and almost immediately reprinted in Latin by the Rome printer Stephan Plannck.

Columbus had sent the letter to Spain’s King Ferdinand and Queen Isabella to offer his first impressions of the riches that were to be found in what he believed to be the eastern edge of Asia.

The Vatican had acquired the letter in 1921 as part of a collection of rare books and manuscripts.

Brugues told diplomats and U.S. officials at the handover ceremony that the Vatican doesn’t know when the swap out occurred, but that the forging technique used was common in the 19th and 20th centuries “so we will probably never know for sure who the forger was.”

Jamie McCall, an assistant U.S. attorney in the district of Delaware, said Parsons bought the book in good faith and was not implicated in the theft. Parsons died in 2014. When presented with evidence that the letter was stolen, his widow agreed to return it.

“She understood the significance of this particular letter to the Vatican, to the world, to the researchers who come to the library in search of answers for what occurred in that period of time,” he said.

He said his office had received a tip in 2011 about several forgeries in European libraries, and so far has found three of the authentic ones and returned them.

Just last week, U.S. authorities returned a copy of the letter to Spain and replaced the forgery that had been in the National Library of Catalonia. In 2016, the U.S. returned to Italy a copy stolen from the Riccardiana library in Florence and ended up in the U.S. Library of Congress.