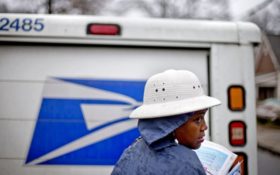 The U.S. Postal Service is reporting a financial loss for the 12th straight year, citing declining mail volume as well as the costs of its pension and health care obligations.

The Postal Service is awaiting a report ordered by President Donald Trump to address the agency’s “unsustainable financial path.”

Postal officials expect finances next year to be helped somewhat by another strong holiday season of package deliveries and from higher stamp prices, which take effect in January. A first-class stamp will increase from 50 cents to 55 cents.

Increases in package delivery were unable to offset drop-offs in letter mail.