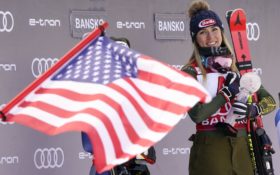 “My family is heartbroken beyond comprehension about the unexpected passing of my kindhearted, loving, caring, patient, wonderful father,” the family posted on Shiffrin’s social media accounts.

The U.S Ski and Snowboard federation said Shiffrin traveled home from Europe to Colorado on Sunday to be with her father and family at a hospital, where he died. No further details were given.

Jeff Shiffrin, an anesthesiologist in Vail, Colorado, and a former ski racer at Dartmouth, often attended his daughter’s races on the World Cup circuit and at major championships with his wife, Eileen. Jeff Shiffrin would trek on the hill with his camera around his neck to take photos of his daughter.

“He taught us so many valuable lessons but above everything else, he taught us the golden rule: be nice, think first,” Shiffrin wrote. “This is something I will carry with me forever. He was the firm foundation of our family and we miss him terribly.”

Shiffrin’s brother, Taylor, was a member of the University of Denver ski team.

Tiger Shaw, the CEO of U.S. Ski & Snowboard, said in a statement: “Jeff was a good friend and we will all miss him terribly. Ours and the entire ski world’s thoughts and prayers go out to his family during this incredibly difficult time.”

Mikaela Shiffrin has a clear lead in the World Cup overall standings and is the three-time defending champion. She skipped the weekend’s races in Russia and had been expected to return for the Feb. 15-16 races at Maribor, Slovenia.

The ski team said she’s expected to remain in Colorado. Her return to the World Cup is unknown at this time.