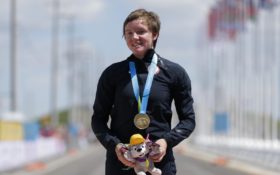 Olympic track cyclist Kelly Catlin, who helped the U.S. women’s pursuit team win the silver medal at the 2016 Rio de Janeiro Games, died Friday at her home in California. She was 23.

USA Cycling chief executive Rob DeMartini said in a statement Sunday that “the entire cycling community is mourning this immense loss. We are offering continuous support to Kelly’s teammates, coaches and staff. We also encourage all those who knew Kelly to support each other through the grieving.”

Catlin was born and raised near Minneapolis, Minnesota, and rose to prominence on the track as a member of the U.S. national team. She also raced on the road for the Rally UHC Pro Cycling Team, and she was pursuing a graduate degree in computational mathematics at Stanford.