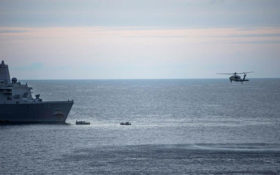 The submerged wreckage of a U.S. military aircraft was found on Monday, two days after it crashed into the sea off the east coast of Australia and left three U.S. Marines dead, Australia’s defense minister said.

An Australian navy ship arrived in Shoalwater Bay in Queensland state Sunday night to help the U.S. military hunt for the MV-22 Osprey, which the Marines said was conducting regularly scheduled operations on Saturday when it crashed into the water. The wreckage was found shortly after the ship’s arrival, Australian Defense Minister Marise Payne said in a statement.

An Australian navy dive team was helping to recover the aircraft, the U.S. Marine base Camp Butler in Japan said.

“The loss of every Marine is felt across our entire Marine Corps family,” Col. Tye Wallace, Commanding Officer of the 31st Marine Expeditionary Unit, said in the statement. “To the families of the brave Marines we lost – there is no way for us to understand what you are going through.”

Twenty-three other personnel who were on board the Osprey when it crashed were rescued.

The Osprey is a tilt-rotor aircraft that takes off and lands like a helicopter, but flies like an airplane. They have been involved in a series of high-profile crashes in recent years.