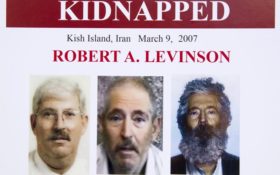 A U.S. judge has ordered Iran to pay $1.45 billion to the family of a former FBI agent believed to have been kidnapped by the Islamic Republic while on an unauthorized CIA mission to an Iranian island in 2007.

The judgment this month comes after Robert Levinson’s family and the U.S. government now believe he died in the Iranian government’s custody, something long denied by Tehran, though officials over time have offered contradictory accounts about what happened to him on Kish Island.

Tensions remain high between the U.S. and Iran amid President Donald Trump’s maximalist pressure campaign over Tehran’s nuclear program. And though the U.S. and Iran haven’t had diplomatic relations since the aftermath of the 1979 U.S. Embassy hostage crisis in Tehran, America stills holds billions of dollars in frozen Iranian assets that could be used to pay Levinson’s family.

In a ruling dated Thursday, the U.S. District Court in Washington found Iran owed Levinson’s family $1.35 billion in punitive damages and $107 million in compensatory damages for his kidnapping. The court cited the case of Otto Warmbier, an American college student who died in 2017 shortly after being freed from captivity in North Korea, in deciding to award the massive amount of punitive damages to Levinson’s family.

“Iran’s conduct here is also unique, given that — astonishingly — it plucked a former FBI and DEA special agent from the face of the earth without warning, tortured him, held him captive for as long as 13 years, and to this day refuses to admit its responsibility,” the ruling by Judge Timothy J. Kelly said.

“And his wife and children, and their spouses and children — while keeping Levinson’s memory alive — have had to proceed with their lives without knowing his exact fate. These are surely acts worthy of the gravest condemnation,” the judge added.

Iranian state media and officials in Tehran did not immediately acknowledge the ruling in a case in which Iran offered no defense. Iran’s mission to the United Nations did not immediately respond to a request for comment Tuesday from The Associated Press.

In a statement, Levinson’s family called the court’s award “the first step in the pursuit of justice.”

“Until now, Iran has faced no consequences for its actions,” the family said. “Judge Kelly’s decision won’t bring Bob home, but we hope that it will serve as a warning against further hostage taking by Iran.”

Levinson disappeared from Iran’s Kish Island on March 9, 2007. For years, U.S. officials would only say that Levinson, a meticulous FBI investigator credited with busting Russian and Italian mobsters, was working for a private firm on his trip.

In December 2013, the AP revealed Levinson in fact had been on a mission for CIA analysts who had no authority to run spy operations. Levinson’s family had received a $2.5 million annuity from the CIA in order to stop a lawsuit revealing details of his work, while the agency forced out three veteran analysts and disciplined seven others.