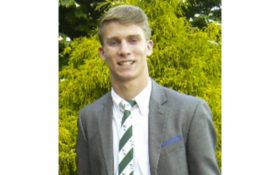 An American college student has been reported missing in Bermuda.

Bermuda police say 19-year-old Mark Dombroski was on a rugby tour with Saint Joseph’s University, of Philadelphia, when he disappeared early Sunday.

Police say he was last seen around 1 a.m. at The Dog House, a bar and restaurant in Hamilton, the island’s capital. They are asking for the public’s help in locating the missing teen, circulating a flyer with his photos.

The police say “there is concern for his well-being.”

Saint Joseph’s is a Roman Catholic Jesuit university. It issued a statement saying it has been in touch with the freshman’s family and “continues to pray for his safe return.”

Dombroski is from Media, Pennsylvania, and is a 2017 graduate of Archmere Academy in Claymont, Delaware.