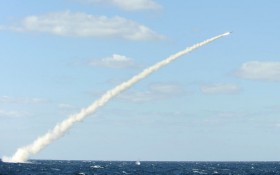 The U.S. will conduct as soon as next weekend another test of a missile defense system meant to counter threats from North Korea.

The launch from Alaska’s Kodiak Island is scheduled to occur at the Pacific Spaceport Complex-Alaska, according to a U.S. Coast Guard notice. Mariners are advised to remain clear of swaths of ocean between Kodiak Island and Hawaii through the weekend.

The FTT-18 test earlier this month included the launch of “two interceptors from two co-located launchers,” Johnson wrote in an email to the Kodiak Daily Mirror. “The first missile engaged the target. The second interceptor was launched to test operational procedures.”

Sponsored: Always Be Prepared In The Event Of An Emergency

A second test from the site, called the FTT-15, will test the system’s ability to intercept a medium-range ballistic missile within the earth’s atmosphere, said Leah Garton of U.S. Missile Defense Agency public affairs.

THAAD, which currently has a 100 percent success rate in 14 tests, uses a direct hit to intercept a target in its final phase of flight. THAAD systems have been placed in Guam and South Korea to counter missile threats from North Korea.