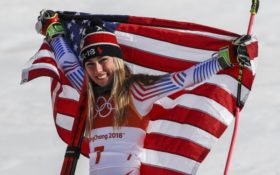 The nervous energy accumulated for Mikaela Shiffrin while she waited, waited, waited for these Olympics — the ones that so many are expecting to be HER Olympics — to finally get started. First one race was postponed. Then another.

And so it was not until a week into the Pyeongchang Games that Shiffrin and the other female Alpine skiers got to compete in the rescheduled giant slalom, an event the 22-year-old American considers a work in progress for her. In second place and still feeling some jitters after the first of Thursday’s two runs, Shiffrin did two things during the 3½ hours before the deciding leg of the GS: She took a nap, and then she sneaked onto the adjacent men’s course at Yongpong Alpine Center for a little free skiing.

Sure was. And sure did.

On a crisp, clear day with very little sign of the gusts that have played havoc with the skiing program, Shiffrin dealt well with her pent-up emotions and put together a pair of aggressive, if not quite perfect, trips through the gates to win the giant slalom for the second Olympic gold medal of her precocious career.

“Definitely, it’s been a mental strain the last couple days, thinking we’re going to race and then not racing. So to finally have the race actually happen today, I was like, ‘Well, I really hope that I actually can do it when the time comes that we finally race.’ And, yeah, I did,” said Shiffrin, who is based in Colorado. “So now we got the ball rolling. I’m really excited for tomorrow.”

As well she should be.

That’s because Friday brings the slalom, by far Shiffrin’s best event, one that she has dominated for five years, including a gold at the 2014 Sochi Games plus a trio of world titles. She is a huge favorite in that one, unlike the giant slalom, in which Shiffrin was merely a strong contender. After that, Shiffrin will skip Saturday’s super-G, according to her mom, because there’s no time to properly prepare. She still intends to enter the downhill and combined.

“I don’t think it gets any easier, but I think she can take a deep breath and say, ’The pressure’s off a little bit. Maybe,’” said her father, Jeff. “She’ll just approach it the way she’s always approached it: It’s left-right-left-right-left-right, forget about the result.”

In this instance, the result was a two-run time of 2 minutes, 20.02 seconds, good enough to beat surprise silver medalist Ragnhild Mowinckel of Norway by 0.39 seconds and Federica Brignone of Italy by 0.46. First-run leader Manuela Moelgg of Italy quickly gave away her 0.20-second advantage over Shiffrin and was eighth.

Mowinckel helped make it a three-medal Alpine day for Norway: Aksel Lund Svindal won the men’s downhill about 30 miles away at the Jeongseon Alpine Center, and Kjetil Jansrud got silver. Switzerland’s Beat Feuz was third in a race originally scheduled for Sunday. Svindal, 35, is the oldest man to win Olympic gold in Alpine skiing.

At Yongpong, Shiffrin found some problems in the choppy terrain of the second half of the 51-gate GS course, in part because nearby trees created shadows that made it tough to see.

But she wasn’t the only one: Her first run was second-fastest; her other was fourth-fastest.

“She attacked both runs, and that’s how we do it. It was the good way to do things,” said France’s Tessa Worley, the reigning world champion, who had a poor opening run and was seventh. “She wanted this medal, and we could see it.”

Said Brignone: “She is much stronger than the rest of us right now — not physically, but mentally, and with the way she works and prepares.”

That last part is key to appreciating the way Shiffrin regrouped and performed in a race originally slated for Monday. Mostly terrific on the World Cup circuit this season — winning 10 of 23 races she’s entered to lead the overall standings — she stumbled in late January and failed to finish three of her last four races.

She acknowledged mental fatigue and took a couple of days off.

Definitely looked refreshed in the giant slalom, with which she contends she has “a love-hate relationship” because it doesn’t come as naturally as the slalom.

Yet after that hour’s snooze in a lodge atop the mountain, followed by the impromptu skiing session with Mom, Shiffrin was able to perform at her best, which clearly is good enough.

“She brought out a lot more natural skiing in the second run that was far less rigid,” coach Mike Day said. “To me, it was far more free.”

After finishing, Shiffrin put her right glove on her chest, mouth agape. She paused and put her poles atop her neon helmet. She covered her ski goggles with both hands, taking the moment in.

Only briefly, though. There is more work to be done. And perhaps more medals to be won.

“It was my 15 seconds to let it all out,” Shiffrin said, “and now I’ve got to focus on tomorrow.”