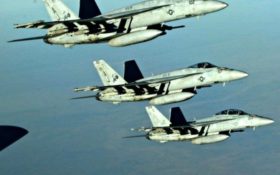 The U.S. military says it has killed 13 members of the al-Shabab extremist group with a new airstrike in southern Somalia.

The statement from the U.S. Africa Command says the strike was carried out Sunday morning. A spokeswoman says it occurred about 50 kilometers (31 miles) northwest of Kismayo and that no civilians were killed.

The United States has carried out 34 drone strikes in Somalia this year after the Trump administration expanded military efforts against Africa’s deadliest Islamic extremist group.

Al-Shabab was blamed for the October truck bombing in Somalia’s capital, Mogadishu, that killed 512 people. Only a few attacks since 9/11 have left a higher death toll.