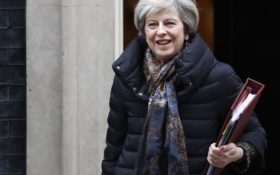 In January of 2016, the Parliament of the United Kingdom debated banning then-Republican presidential candidate Donald Trump from their country.

Members of parliament threw nasty accusations at Trump, labeling him “crazy”, a “buffon”, and a “wazzock” (British slang for a fool).

In January 2017, after voters rejected the establishment in Europe with their stunning June “Brexit” vote, and the surprise victory of Trump in the U.S. presidential election, the government of the U.K. is singing a totally different tune.

The first world leader to meet with Trump after his inauguration, Prime Minister Theresa May has prepared a statement reaffirming the U.S.-U.K. “special relationship” and will ask Trump to help lead the free world.

Referencing Trump’s election and the Brexit vote, May’s prepared remarks state: “As we rediscover our confidence together — as you renew your nation just as we renew ours we have the opportunity, indeed the responsibility, to renew the special relationship for this new age,” May is expected to tell Republican lawmakers gathered in Philadelphia on Thursday.

“We have the opportunity to lead, together, again.”

The United Kingdom has been the United States closest ally for nearly two hundred years; it’s nice to hear them no longer accusing our president of buffoonery.

Here’s how the U.K. paper, The Sun, is reporting on the trip.

Wow, what a difference a year can make.