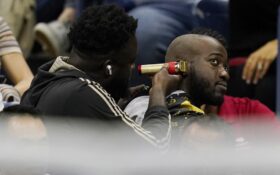 There was quite a hairy situation at the U.S. Open on Tuesday night.

Two men’s stay in the Arthur Ashe Stadium seats was, um, cut short after one buzzed the other’s head right there in the stands while Nick Kyrgios and Karen Khachanov played their quarterfinal.

They had clippers and the sort of cape a barber usually uses to keep a customer clean.

Soon enough, social media users were all excited about how a YouTuber known for his pranks had pulled this one off.

Tournament security removed the two from the match.

“When someone saw it, security went to the two individuals. They were escorted out of their seats and then off the grounds for disruption of play,” U.S. Tennis Association Brendan McIntyre said, adding: “There’s a first time time for anything.”