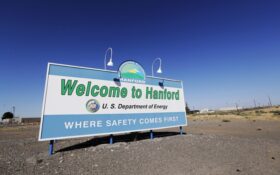 Two companies that do work at a former nuclear weapons production plant will pay fines of nearly $58 million for improperly billing the federal government for thousands of hours of work that were not performed.

Federal prosecutors on Tuesday afternoon announced the settlement involving the Hanford Nuclear Reservation, a Manhattan Project-era facility near Richland, Washington, that is the nation’s most contaminated nuclear site.

The settlement was reached between Bechtel Corp. and AECOM Energy & Construction Inc., which for years have been constructing a giant nuclear waste treatment plant to clean up the Hanford site, which produced most of the plutonium for the nation’s nuclear arsenal.

“It is stunning that, for nearly a decade, Bechtel and AECOM chose to line their corporate pockets by diverting important taxpayer funds from this critically essential effort,” Assistant U.S. Attorney Joseph Harrington said in a news release.

As part of the agreement, the contractors denied any liability in regard to further legal actions.

“As a company, we felt it was in the best interest of the project and our customer to resolve this matter so that we can avoid the distractions and expenses of a protracted legal proceeding,” Barbara Rusinko, president of Bechtel’s Nuclear, Security & Environmental global business unit, said in a press release.

Hanford was created during World War II as part of the Manhattan Project effort to create an atomic bomb. Plutonium produced at Hanford was used in the atomic bomb dropped on Nagasaki, Japan, that effectively ended World War II.

During the Cold War, Hanford produced about two-thirds of the plutonium for the U.S. nuclear arsenal. That work created the nation’s largest collection of toxic radioactive waste, some 56 million gallons contained in 177 aging underground storage tanks.

The U.S. government has already spent billions of dollars cleaning up the Hanford site, and the unfinished Waste Treatment Plant is a key component to clean up waste in the underground tanks. Construction on the facility began nearly 20 years ago, and has been hampered by design and safety issues.

The case started after four whistleblowers came forward in late 2016, telling federal prosecutors about alleged time card fraud in which the companies billed the U.S. Department of Energy for work that was never completed.

The companies hired hundreds of electricians, millwrights, pipefitters and other skilled tradesmen, known as “craft” workers, to build the plant, the government said.

Between 2009 and 2019, Bechtel and AECOM executives admitted to overcharging the government for “unreasonable and unallowable idle time” by craft workers even when those workers had no duties to perform, the government said.

Company executives admitted they continued to overbill the government “even after Bechtel and AECOM knew they were under investigation for the improper billing practices,” the government said.

Tuesday’s announcement was the second settlement agreement between federal regulators and Bechtel and AECOM. The companies agreed to pay $125 million in November 2016 for allegations that they “knowingly violated quality standards at Hanford and used substandard materials” in constructing portions of the Waste Treatment Plant.

Under Tuesday’s settlement, Bechtel and AECOM also entered into a three-year independent corporate monitor agreement. The companies face an additional $10 million penalty if they violate the terms of that monitoring agreement.

“Hanford needs—and indeed fights for—every dollar it receives to accomplish its cleanup mission,″ executive director Tom Carpenter said. “We cannot afford this egregious fraud to get in the way of a safer, cleaner future.”

But Carpenter was critical of the settlement.

“Once again a Hanford contractor buys its way out of trouble,″ he said. ”Hanford Challenge demands real accountability from DOE to get the cleanup we deserve and pay for.”

An attorney for the law firm representing the whistleblowers praised their courage.

“Our whistleblower clients are the heroes in this story,″ said Richard Condit, of Mehri & Skalet PLLC of Washington, D.C. “Unfortunately, the Hanford project has often been victimized by unscrupulous contractors who chose to cheat the taxpayers for their own personal gain.″