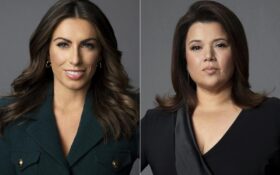 ABC’s The View has named two “conservatives” — Alyssa Farah Griffin and Ana Navarro — as regular panelists on the daytime talk show, and neither are fans of former President Donald Trump.

Farah Griffin fills the chair left empty when Meghan McCain quit last summer after four years on the show. Farah Griffin is a communications strategist who worked as a spokesperson at the Pentagon and for Trump and Vice President Mike Pence during the last administration.

Navarro, a familiar face as a frequent guest host at The View since 2015, was also officially named as an addition to the show’s group of five hosts on Thursday.

McCain was a magnet for controversy and attention during her time onscreen where she often fought with her more liberal co-hosts, and complained after she left of a toxic work environment.

“If there’s one thing that I believe, it’s that there’s more that unites this country than divides it,” Farah Griffin said. “I think we can demonstrate at this table what our elected leaders often can’t, which is disagreeing but doing so respectfully and doing so in a fact-based manner. We don’t need any of these conspiracies and lies that have taken up so much of news.”

Farah Griffin, who is also a CNN contributor, quit the Trump administration in December 2020. She publicly turned against her old boss following the Jan. 6, 2021, insurrection at the U.S. Capitol and spoke to the House committee investigating the event.

She said the last two years have been turbulent for her, including dealing with death threats.

“I worked for an administration that I ended up speaking out against fervently and continue to do so daily,” she said. “It changes a lot in your life. I lost a lot of friends. I’m estranged from family members, but I have to say this: I am so proud to have found my voice.”

Not everyone has been quick to turn the page, and there’s a social media campaign to boycott The View because of her hiring, with some liberal fans unwilling to forgive the new host’s service to Trump.

“Many in the media are still trying to normalize these folks,” MSNBC host Tiffany Cross said on her weekend show. “And why?”

The View discusses the day’s “hot topics” on its show and is seen by many politicians as an important conduit to women voters during national campaigns. Yet it’s also a target: Florida Gov. Ron DeSantis’ office recently turned down an invitation to appear on the show, and publicly pointed to hostile comments made by the show’s hosts about him.

Led by veterans Whoopi Goldberg and Joy Behar, the show is generally dominated by its liberal hosts. Goldberg refuses to even say Trump’s name.

Farah Griffin told her co-hosts, who also include Sunny Hostin and Sara Haines, that she knew it was “going to get sporting sometimes.”

“It’s going to get more than sporting,” Hostin replied.

Navarro has worked for GOP figures John McCain and Jeb Bush. She had a Twitter tiff with the former president’s son last September; after Donald Trump Jr. made an online comment about Navarro’s weight, she called him a dimwit.

Navarro said she was pleased to be joining the show officially, even if it means a commute from her home in Miami.

“We’re finally putting a ring on it,” she said.