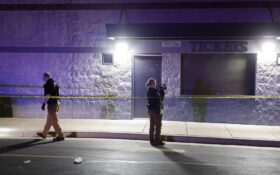 Police in Oklahoma said Monday they have found two more gunshot victims who were wounded in a shooting at a Oklahoma high school football homecoming game.

Police initially said one 17-year-old died and another 17-year-old was wounded in the shooting Friday at McLain High School for Science and Technology in Tulsa. But authorities said Monday that two more victims were treated for gunshot wounds — a 20-year-old woman and a 9-year-old girl.

Both were treated for their injuries and released from a hospital, Tulsa police said.

Police said the shooter ran away after opening fire during the football game between McLain and Miami High School. No arrests have been made.

The Miami superintendent said Saturday that the school would no longer travel to the McLain campus for any activities, citing safety concerns. Miami is a city of about 13,000 people about 80 miles (130 kilometers) northeast of Tulsa.

Classes Monday were canceled at McLain but counseling services were available for students.