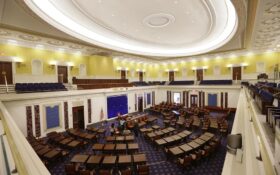 Sen. Chris Van Hollen, D-Md., was giving speech on Sunday when he suffered a stroke onstage and was rushed to the hospital.

Meanwhile, Pennsylvania’s Lt. Gov. John Fetterman was campaigning for the Democratic nomination to U.S. Senate when he suffered a stroke Thursday, only five days before the election.

Both politician’s offices released statements announcing plans for full recovery. Still, Democrats are dealing with questions about the political fallout from these health scares.

Van Hollen, 63, tweeted, “I’m feeling much better but will follow doctors’ orders and curtail my schedule for the next few days.”

He explained that he had been experiencing common symptoms, like “lightheadedness and acute neck pain.” He added that an angiogram revealed “a minor stroke in the form of a small venous tear in the back of my head.

However, he said that he remains able to serve in the U.S. Senate.

“Fortunately, I have been informed that there are no long-term effects or damage as a result of this incident,” he wrote. “I look forward to returning to work in the Senate later this week.

This weekend, after feeling lightheaded while delivering a speech, I sought medical attention at the recommendation of the Attending Physician. I’m feeling much better but will follow doctors' orders and curtail my schedule for the next few days. My full statement is below: pic.twitter.com/1sYq7FZMqS

Even if Van Hollen had resigned, he still would have left the Senate’s balance of power intact.

According to Maryland’s constitution, the Republican Gov. Larry Hogan would need to fill a Senate vacancy within 30 days… but he would also need to choose someone recommended by the outgoing senator’s political party — the Democrats, in this case.

In other words, the Democrats look unlikely to experience any short-term fallout from Van Hollen’s stroke. They may not be so lucky in the case of Fetterman.

Fetterman, the leading Democrat in Pennsylvania’s high-profile Senate contest, expects a “full recovery,” according to his campaign’s remarks to The Associated Press.

Still, he suffered a stroke just days before the primary election in a critical swing state.

The 52-year-old Fetterman, who confirmed that he had been hospitalized all weekend, insisted the health emergency wasn’t slowing his campaign. But the stunning revelation, two days before Pennsylvania’s primary, created a cloud of uncertainty over the Democratic front-runner’s candidacy in what may be one of the party’s best Senate pickup opportunities.

“Feeling good, all things considered,” Fetterman said in a text message to AP.

On Friday morning, before Fetterman was to appear at a scheduled campaign event at Millersville University, Fetterman’s wife, Gisele, “noticed that John was not himself, and shortly after he started slurring his speech and he was taken to the hospital,” a campaign spokesperson said.

In a 16-second video released by his campaign, a seated Fetterman, speaking clearly, explained that he “just wasn’t feeling very well” on Friday and decided to go to the hospital at the urging of his wife. He detailed the situation further in a written statement.

“I had a stroke that was caused by a clot from my heart being in an A-fib rhythm for too long,” Fetterman said. He said the doctors were able to remove the clot, “reversing the stroke,” and got his heart under control.

“The good news is I’m feeling much better, and the doctors tell me I didn’t suffer any cognitive damage,” he said in the statement.

On Friday, I wasn’t feeling well, so I went to the hospital to get checked out.

I didn’t want to go – I didn’t think I had to – but @giselefetterman insisted, and as usual, she was right.

The good news is I’m feeling much better + I’m well on my way to a full recovery. pic.twitter.com/WQ5X6QgQen

Questions about Fetterman’s health swirled throughout the weekend after he canceled scheduled public appearances Friday, Saturday and Sunday. His campaign cited a health issue but was not specific until Sunday.

His campaign explained the delay in disclosing it publicly by saying Fetterman’s condition was “evolving in real time since Friday. We wanted to put out something once we had a clearer picture of his health.”

Fetterman did not say how much longer he would be in the hospital.

“They’re keeping me here for now for observation, but I should be out of here sometime soon,” he said in the statement. “The doctors have assured me that I’ll be able to get back on the trail, but first I need to take a minute, get some rest, and recover.”

Fetterman’s future treatment regimen is still being worked out, but will include a healthier diet and more rest, a campaign spokesperson said.

Democrats see the race to replace Pennsylvania’s retiring Republican Sen. Pat Toomey as one of their best opportunities to pick up a Senate seat this fall. Voters will decide the general election nominees for both parties on Tuesday.

Thousands of early votes have already been cast. Van Hollen is also running for election to a second term this year, but the race looks uncompetitive.

Fetterman is the solid Democratic favorite. He has led in polls and fundraising from the start, even as the party’s establishment rallied around Lamb. Despite such support, Lamb struggled to reach voters or even pierce Fetterman’s standing with primary voters.

Lamb tweeted that he was conducting a television interview when he learned of Fetterman’s stroke.

“Hayley and I are keeping John and his family in our prayers and wishing him a full and speedy recovery,” Lamb wrote.

Fetterman’s heart condition, atrial fibrillation, occurs when the heart’s top chambers, called the atria, get out of sync with the bottom chambers’ pumping action. Sometimes patients feel a flutter or a racing heart, but many times they’re not aware of an episode.

A-fib is most common in older adults, and other risks include high blood pressure or a family history of arrhythmias. It causes 130,000 deaths and 750,000 hospitalizations a year in the U.S.

Fetterman, who is 6-foot-8, has been open about his push to lose weight in the past. He weighed in at over 400 pounds before losing nearly 150 pounds in 2018.

His imposing stature has been a part of his political appeal.

The former western Pennsylvania mayor has tattoos down his arms, a clean-shaven head, and a goatee. He curses on social media and wears shorts practically everywhere, even in the winter.

He vowed to press forward on Sunday despite the health setback.

“Our campaign isn’t slowing down one bit, and we are still on track to win this primary on Tuesday, and flip this Senate seat in November,” he said. “Thanks for all the support, and please get out there and vote.”