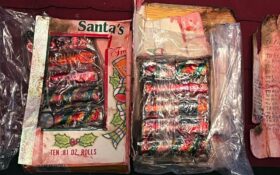 Two New Hampshire brothers have gotten their holiday regifting skills down to an art — they’ve been passing the same hard candy back and forth for over 30 years.

It started in 1987, when Ryan Wasson gave a 10-roll Frankford “Santa’s Candy Book” with assorted fruit flavors to his brother, Eric Wasson, as a joke for Christmas, knowing that Eric wouldn’t like it.

“I didn’t eat them,” Eric Wasson told WMUR-TV. “And so the next year I thought, ‘Hey, I think I’m going to give it back to him. He’ll never remember.’”

But Ryan immediately recognized it. They’ve been taking turns ever since, keeping a log of their exchanges. They’ve gotten creative about it.

Ryan Wasson told the station the candy has been frozen in a block of ice and put in Jell-O, adding, “He one time sewed it into a teddy bear.”

The tradition has also involved family members, co-workers and even a sheriff’s department. Last year, it was presented to Ryan Wasson on a silver platter at a restaurant.

This year, Ryan Wasson turned to a group on social media for ideas.

Suggestions included having it arrive via a pizza delivery or Christmas carolers, hiding it in a book or cake, or holding a scavenger hunt with clues.

“If you ask which one has ever done the best as far as giving these, we’re both going to say it’s ourself, right?” Ryan Wasson said. “We’re never going to give in.”