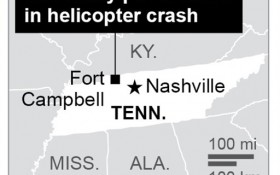 Two Army pilots were killed when their helicopter crashed near Fort Campbell in rural Tennessee, the military said.

The two crewmembers were flying a two-seat AH-64D Apache during a routine training mission when the helicopter went down around 7 p.m. Wednesday, a news release from the Army’s 101st Airborne Division said.

The helicopter was found in a river bottom and was on fire when first responders arrived, Montgomery County Emergency Management Agency Director Jerry Buchanan told Nashville newspaper The Tennessean.

The Army says the scene was secured by military police from Fort Campbell and Montgomery County law enforcement.

The cause of the crash has not been determined, the Army news release said. The crash was being investigated by the Army Combat Readiness Center. The names of the pilots were not immediately released, pending notification of next of kin.

Fort Campbell is located on the Kentucky-Tennessee border, about 60 miles northwest of Nashville.