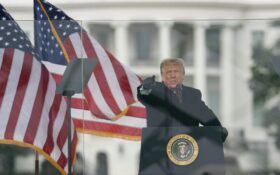 Twitter shed over five billion dollars in its market value once trading opened on Monday. The companies stock was down over six percent at the time of writing.

The downturn adds to the sizable stock price plummet for the company so far this year. Twitter shares were valued at $55.16 on Jan. 4, the first day of trading in 2021.

It’s not just conservative Americans voicing their support for Trump following his unexpected Twitter ban, either.

Twitter permanently suspended Trump from the microblogging platform on Friday, citing a “risk of further incitement of violence” in the wake of the storming of the U.S. Capitol by supporters of the outgoing president.

Asked about Twitter’s decision, Merkel’s spokesman, Steffen Seibert, said the operators of social media platforms “bear great responsibility for political communication not being poisoned by hatred, by lies and by incitement to violence.”

But Seibert also said that freedom of opinion is a fundamental right of “elementary significance.”

“The 75,000,000 great American Patriots who voted for me, AMERICA FIRST, and MAKE AMERICA GREAT AGAIN, will have a GIANT VOICE long into the future. They will not be disrespected or treated unfairly in any way, shape or form!!!” the president wrote.

He followed it up with a short tweet: “To all of those who have asked, I will not be going to the Inauguration on January 20th.”