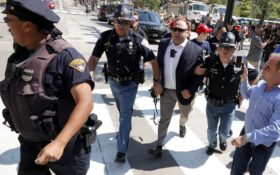 Twitter CEO Jack Dorsey defended his company’s decision not to ban right-wing conspiracy theorist Alex Jones and his “Infowars” show, as many other social media platforms have done, saying he did not break any rules.

Facebook, Apple, YouTube and Spotify took down over the past week material published by Jones, reflecting more aggressive enforcement of their hate speech policies after rising online backlash and raising pressure on Twitter to do the same.

“We didn’t suspend Alex Jones or Infowars yesterday,” Dorsey said in a series of tweets late Tuesday . “We know that’s hard for many but the reason is simple: he hasn’t violated our rules. We’ll enforce if he does.”

Dorsey said Twitter did not want to take “one-off actions to make us feel good in the short term, and adding fuel to new conspiracy theories.”

He said he wanted the company to avoid succumbing to outside pressure but instead impartially enforce straightforward principles “regardless of political viewpoints.” He also linked to a blog post Tuesday by the company’s vice president for trust and safety, Del Harvey, outlining the company’s policies.

“Twitter is reflective of real conversations happening in the world and that sometimes includes perspectives that may be offensive, controversial, and/or bigoted,” she said. “While we welcome everyone to express themselves on our service, we prohibit targeted behavior that harasses, threatens, or uses fear to silence the voices of others.”

Jones, who has 858,000 followers on Twitter, has built up his profile while promulgating conspiracy theories, including the claim that the 9/11 terror attacks were carried out by the government. He is perhaps most notorious for claiming that the 2012 Sandy Hook mass school shooting, which left 26 children and adults dead, was a hoax and that the surviving relatives are paid actors. Family members of some of the victims are suing Jones for defamation.

Dorsey said that it’s up to journalists to “document, validate, and refute” rumors and sensationalized issues spread by accounts like Jones’s so “people can form their own opinions.”

Twitter is taking other steps besides account deletions to combat misuse in its battle to rein in hate and abuse even as it tries to stay true to its roots as a bastion of free expression. Dorsey acknowledged last year that the company hasn’t done enough to curb such abuse and protect users.

Jones says his shows, which are broadcast on radio and online platforms and had been available on YouTube, reached at least 70 million people a week. It’s unclear how big his audience is now after the latest bans.