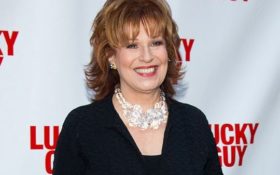 ABC’s “The View” might have one less star by the end of this week. Liberal host Joy Behar threatened to quit after an on-air meltdown on Monday when she was asked to stop bashing President Donald Trump.

Behar was shutdown by co-host Meghan McCain when she tried to turn a tribute to late President George H.W. Bush into a Trump bashing session.

The exchange left Behar screaming and cursing at producers, insiders say. She even threatened to quit the television show over it. Only co-host Whoopi Goldberg, herself an outspoken Trump critics, kept her cool.

It seems the Trump Derangement Syndrome is in full-effect at ABC’s headquarters.

During a eulogy of Bush, the hosts were talking about the former president’s legacy.

“There so much to learn from his [late President George H.W. Bush’s] life, and I hope the next generation… they may not know him the way we do, the way we remember him… but I hope they learn from him,” co-host Abby Huntsman said during the segment — only to be interrupted by Behar.

“Well… I want to say one thing about him that was not picked up really, because as a candidate he said, ‘Those who think we’re powerless to do anything about the greenhouse effect are thinking about the White House effect,’” Behar said, referencing climate change. “Then he signed into law the Clean Air Act amendment of 1990, one of the most sweeping environmental statues ever.”

“This president that we have now is going to unravel everything that he did and Obama did, and if I ever become a one-issue voter, it will be about pollution,” she said.

McCain jumped in, asking Behar to stay on-topic — and Behar lost her mind.

“Can we focus on the [late] president, please?” McCain asked. “I just, I don’t want to talk about Trump when we’re in a moment… when we’re honoring a great president.”

“Well, I do! Excuse me! Excuse me a second, please!” Behar shot back.

“Well, I don’t care what you’re interested in, either,” McCain responded.

Goldberg quickly cut away from the segment as Behar slammed her notes onto the desk — but according to The Daily Mail, that wasn’t the end of Behar’s meltdown.

The directors cut Behar’s mic, but insiders say she started screaming curses at McCain and producers while the cameras still rolled.

Behar reportedly threw her hands in the air and yelled “My God! Get this b***h under control!”

“If this s**t doesn’t stop, I’m quitting this damn show. I can’t take this much more,” Behar reportedly threatened — all while the studio audience watched. “I’ve tolerated a lot of s**t on this show, but I’m at my wits end with this entitled b***h! Enough already! Enough already! I’m not playing nice any longer!”

“I don’t know why she’s so upset. I just wanted her to focus on President Bush and not bring Trump into this for once,” McCain allegedly responded.

See the clip below for yourself.

Warning: It gets nasty.