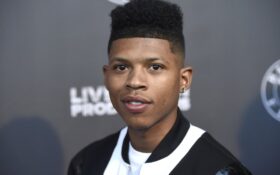 “Empire” actor Bryshere Gray has been arrested in Arizona on accusations of abusing his wife, police said.

The woman had visible injuries when she flagged someone down to ask for help near Gray’s home in the Phoenix suburb of Goodyear, saying her husband had assaulted her, police said. She told emergency responders that Gray had strangled her, and she was taken to a hospital, authorities said.

Gray refused to leave his home when police arrived but was arrested after SWAT and crisis negotiators responded, police said.

Gray, who played Hakeem Lyon on the Chicago-based TV show, was pulled over in Chicago in 2019 after authorities said a temporary license plate didn’t match the 2014 Rolls Royce he was driving. He was arrested on a misdemeanor registration charge and ticketed.

“Empire,” which ran for six seasons on Fox, aired its series finale in April.