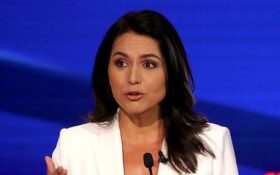 On Monday, Gabbard spoke with Judge Jeanine Pirro on Fox News. She said:

These drug cartels, these human traffickers, they are incredibly emboldened to the point where they feel that they can do this without consequence, where they feel they can continue profiting off of trafficking people across these borders that are essentially open.

The Biden-Harris administration has an open-door policy at the borders.

In June, Harris spoke to local people considering immigration, and she famously said, “Do not come, do not come.”

This week, Gabbard fired back:

It doesn’t matter how many times Secretary Blinken or Kamala Harris or anyone from the administration says, you know, don’t come across the border… Actions speak louder than words…

The faith and trust that the American people need to have in our leaders is dropping every day. The Department of Homeland Security secretary recently told Congress: ‘Our borders are secure.’

This is what he said. This kind of bold-faced lie, whether it has to do with domestic issues or foreign policy issues! We’ve seen this with Afghanistan and the tragically botched withdrawal of our troops and Americans out of Afghanistan.

Harris, while running for president, criticized Gabbard for her recurrent presence on Fox News and her disloyalty to former President Barack Obama.

In 2019, Harris went on MSNBC and told Gabbard, “I think that it’s unfortunate that we have someone on this stage who is attempting to be the Democratic nominee for president of the United States who during the Obama administration spent four years, full time, on Fox News criticizing President Obama.”

In the past, Gabbard has angered the establishment Democrats and appealed to conservative voters.

In October 2019, CNN polled Gabbard’s favorability rate in New Hampshire, ahead of the state’s presidential primary. In this poll, Gabbard was viewed favorably by only 23 percent of Democrats… but a whopping 59 percent of Republicans.

Gabbard was vilified — without evidence — as a spoiler candidate. Former State Secretary Hillary Clinton went on a podcast in 2019 to accuse Republicans of “grooming” Gabbard for a third-party candidacy. In the end, Gabbard ended her presidential campaign to endorse Biden.

Gabbard has been named as an effective running mate for Florida Gov. Ron De Santis, a Republican.

“Americans might warmly welcome a presidential ticket that casts aside partisan foolishness and cheap debating points for the benefit of the people,” an op-ed writer for The Hill wrote on Saturday. “It’s something DeSantis should keep in mind if he runs for president in 2024.”

Pirro asked about the 2024 election during her interview with Gabbard. She agreed with Gabbard’s criticism of Biden’s leadership, and she followed up, “What are Americans supposed to do? Just wait until 2024?”

Gabbard declined to speak about the 2024 election. She responded, “Well, we’ve got representatives of the American people in Congress who have a responsibility to hold this administration accountable.”

Pirro replied, “Nope, nope. We got to vote.”

The open door policy of this administration is creating a humanitarian crisis and a very serious security threat for our country—but for the human trafficking cartel, this policy is like manna from heaven. pic.twitter.com/KRvugTBuTj