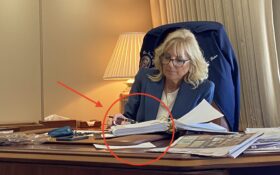 President Joe Biden is abroad for the international G-7 meeting of world leaders in the United Kingdom.

But it wasn’t long after his plane took off from the ground that the scrutiny began.

A strange photo was released just ahead of Friday’s crucial meeting — and it was actually First Lady Jill Biden at the center of the criticism.

Prepping for the G7. pic.twitter.com/drPmb2vBwI

That’s a photo of Jill in the desk aboard Air Force One.

And Fox News’ Tucker Carlson had something to say about it.

“Who’s gonna represent the United States —  us — at this year’s G-7 summit?” Carlson asked,  starting his show’s monologue Wednesday. “Joe Biden can’t do it obviously, we don’t wanna be mean , but you know why he can’t, he just can’t.”

“Kamala Harris could go, but she’s tied up right now getting yelled at by Guatemalan farmers.”

“Thankfully there’s a doctor in the house, Dr. Jill,” Carlson says, describing the photo that had critics baffled. “You can see her husband’s monogramed jacket on the chair behind her.”

“She’s sitting at Joe Biden’s own desk on Air Force One so the point couldn’t be clearer: Dr. Jill’s in charge now.”

Carlson’s comments echo the sentiment of other critics, who have openly questioned who was really in charge ahead of Biden’s first major meeting with international figures.

“Why is Jill Biden ‘prepping’ for the G-7, isn’t that supposed to be the job of her husband, that guy who allegedly got more votes than anyone in history?”

He also wrote that he noticed similarities in the picture with Edith Wilson, who he says partially “took over” after then-President Woodrow Wilson had a stroke.

But Carlson confessed that something else took his attention as well.

“What’s in the binder? That’s our question. What exactly is Dr. Jill reading?”

You can watch Carlson’ segment below: