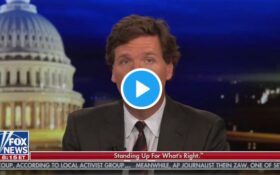 Fox News star Tucker Carlson said that freedom of speech is under attack like never before — and it has inspired him to start a new show.

“Freedom of Speech has never been under attack like it is now,” Carlson announced on his primetime show Wednesday. “Media companies are shrinking in the face of it, and shrinking audiences.”

Carlson said in response, he is moving in the opposite direction — expanding his nightly opinion show into a daytime format.

“We often don’t have enough time to get to everything we want to talk about in a single hour,” Carlson told viewers. “So we’re launching a couple of new programs here.”

The change comes in four days. The new “Tucker Carlson Today” show will debut on Monday and will air three times a week on Fox News’ streaming app Fox Nation.

He also has announced a “Tucker Carlson Original” special once a month that will “explore a single topic in greater depth than typically done on a live television show.”

“This is my twelfth year at Fox News and I’ve never been more grateful to be here,” Carlson said in a press release when the new shows were first announced. “As other media outlets fall silent or fall in line, Fox News Media’s management has redoubled its commitment to honesty and freedom of speech.”

“I consider that heroic at a time like this,” he said.

Tucker announces "Tucker Carlson Today," a new show that will air during the day three times a week on Fox Nation starting on Monday pic.twitter.com/E94jch0Cz0