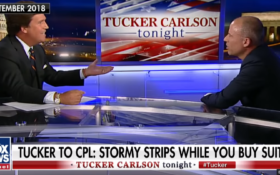 Fox News host Tucker Carlson had it right all along — and the rest of the media was completely wrong!

New York prosecutors made the decision Thursday to charge Avenatti. Authorities say he stole $300,000 from Daniels over a book deal, using the funds to pay for his own ventures.

Just one year ago, MSNBC and CNN were calling Avenatti the “savior of the Republic.”

Only Carlson called out Avenatti. In September 2018, the Fox News star went OFF on Avenatti straight to his face. He called Avenatti a swindler, creepy, and said he was abusing his client.

“Stormy Daniels is, right now, working in strip clubs in little towns on stage. People are throwing things at her. You are wearing a $1,000 suit. Why is — why are you not paying her?” Carlson asked. “You’ve profited from Stormy Daniels. You are exploiting her and you know that.”

You can watch Carlson’s vindication here:

The embattled lawyer ascended to fame with wild claims that he’d take down Trump, and the media ate it up.

In fact, he appeared on CNN a jaw-dropping 108 times!

Liberal anchors even asked him to run for president!

With Avenatti now facing over 400 years in prison, the media has moved on.

But The Horn News remembers — and we have a montage of liberals fawning over Avenatti.

The media and Democrats are so Trump obsessed, they’re willing to push anyone in front of the camera — whether it’s former White House aid Omarosa, who claimed she secretly recorded the president, or Michael Cohen, a convincted criminal who is now a hero for the Democrats because of the mean things he says about Trump.

But Cohen is in jail.

And it seems Avenatti is about to join him.