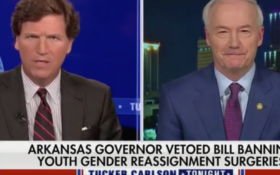 Fox News’ Tucker Carlson clashed with Gov. Asa Hutchinson, R-A.R., on Tuesday night over a major bill that was recent vetoed by the governor.

Carlson welcomed Hutchinson onto his popular cable news program to discuss a controversial measure passed in the Arkansas legislative chamber.

The bill in question would have banned underaged gender reassignment surgeries — something popular among voters on both sides of the aisle.

Yet Hutchinson vetoed it.

Tucker argued that the controversial surgical procedure is “chemical castration” for children.

“I think of you as a conservative,” Carlson told the Arkansas Gov. “Here you have come out publicly as pro-choice on the question of chemical castration of children. What changed?”

Hutchinson claimed that the bill was too extreme.

“… if it’s clear that this was about prohibiting procedures of sex reassignment surgery, absolutely, I would have signed that bill,” he said in his defense.

“But this was the first law in the nation that invokes the state between medical decisions, parents who consent to that, and the decision of the patient,” Hutchinson continued.

“This is one that crosses the line. There is no need for it.”

In the words, he refused to sign the bill because he thought the legislation was government overreach.

Hutchinson said the decision was difficult, being both a man of “faith” and “limited government.”

“First of all, you have parents involved in very difficult decisions. You have physicians that are involved in these decisions,” he said. “And I go back to William Buckley. I go back to Ronald Reagan. The possibles of our party, which believes in the limited role of government.”

Ultimately, Hutchinson said he thinks medical professionals should be in charge of such decisions.

Carlson countered that the long-term effects are still relatively unknown and it’s dangerous to allow Arkansas to continue the practice.

The Fox News host also accused Hutchinson of having been influenced by special interest groups which pushed for a veto of the bill.

“Let me just say, governor, with respect, I am skeptical that not a single corporation in the state of Arkansas has weighed in with you one way or the other on this bill,” said Carlson.

You can watch the segment below:

WATCH: Tucker Carlson and Arkansas Gov. Asa Hutchinson debate the governor's decision to veto a bill banning gender surgeries for minors that was later overridden by the Arkansas state legislature.

Gov. Hutchinson says that the bill "invokes the state" in medical decisions. pic.twitter.com/kwzGtTwtle