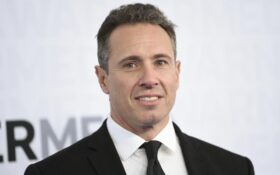 The Cuomos’ political dynasty has fallen, and it may bring down the career of the CNN star Chris Cuomo.

Last month, the CNN host received bipartisan criticism for purporting to interview his brother, the disgraced Gov. Andrew Cuomo. He allowed the governor too much space to spin the narrative, the critics said.

Now, Cuomo has become mired in another scandal: one over sexual harassment.

He will be fired soon, Fox News’ Tucker Carlson predicted.

“I was at the party with my husband, who sat behind me on an ottoman sipping his Diet Coke as I spoke with work friends,” she wrote on Friday. “When Mr. Cuomo entered the Upper West Side bar, he walked toward me and greeted me with a strong bear hug while lowering one hand to firmly grab and squeeze the cheek of my buttock.”

“’I can do this now that you’re no longer my boss,’ he said to me with a kind of cocky arrogance. ‘No you can’t,’ I said, pushing him off me at the chest while stepping back, revealing my husband, who had seen the entire episode at close range.”

Cuomo told the Times last week, “As Shelley acknowledges, our interaction was not sexual in nature. It happened 16 years ago in a public setting when she was a top executive at ABC. I apologized to her then, and I meant it.”

Ross recalls the apology from Cuomo. In fact, she dug up his apology email from 2005.

However, she now views Cuomo’s apology as glib. She told Insider, “I was hoping that in 15, 16 years that he had changed, but he’s no more enlightened today than he was then, as demonstrated by his response.”

The apology wasn’t enough for Ross… or for Carlson.

Carlson went on The Megyn Kelly Show to speculate about the future of Cuomo’s career.

“I do think, in the case of Chris Cuomo, he’s clearly getting fired,” he told Kelly.

“Everyone knows Shelley Ross. This is not a small thing at all,” he continued. “This is a very powerful person accusing Chris Cuomo and proving that he acted like a pig.”

If that’s true, then Cuomo may be toast. The most successful prosecution in the court of public opinion tend to involve multiple accusations, with each corroborating the other. Consider the cases of Bill Cosby and Harvey Weinstein.

“These things are always a pattern of piggish behaviors,” he elaborated, after questioning by Kelly. “I think there’s no question he’s getting fired.”

However, Carlson remained optimistic about Cuomo’s scandal. He said, “I hope for everybody who’s wrecked in public that there’s a moment of reckoning and that there’s a redemption.”

Kelly agreed to an extent. She said, “I’m a Catholic at heart. So I’m big into forgiveness.”

However, she expressed some skepticism on account Cuomo’s glib apologies for past incidents.

“Just look back over the last couple years with the stupid pretending to come out of the basement… He was out with COVID on the streets… He lied about that too,” she said.

“It’s just one thing after another… I don’t really want to see a bunch of redemptions, if it involves him looking into a camera night after night, spewing more lies.”

She and Shelley Ross have that in common.