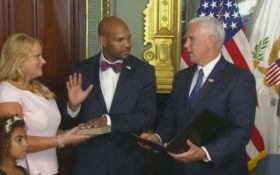 Dr. Jerome Adams will serve as the nation’s chief doctor during Trump’s term. Adams is already very familiar and trusted by Vice President Mike Pence, who nominated him as then Indiana’s governor to serve as the state’s health commissioner in 2014 and was reappointed earlier this year by Gov. Eric Holcomb.

In Indiana, Adams has been a prominent backer of allowing counties to start needle-exchange programs aimed at stemming the spread of diseases among intravenous drug users as the state struggles with opioid abuse.

As the health commissioner, Adams oversaw the effort, which Pence reluctantly supported in 2015 after more than 180 HIV cases hit a rural southern Indiana county that were blamed on needle-sharing among people injecting a liquefied painkiller.

Pence tweeted the following after the ceremony —

.@POTUS is committed to the health & well-being of the US people & we are confident Dr. Jerome Adams will succeed as our new surgeon general pic.twitter.com/F3QPheWs3m

Adams wrote in a June 22 commentary distributed by the state health department that needle exchanges “are proven to save lives” by preventing HIV, hepatitis and other infections. He said it also connected IV drug users with treatment that can lead to their recovery from addiction and did not increase drug use.

“Syringe exchanges aren’t pretty. They make people uncomfortable. But the opioid epidemic is far uglier. It affects the student athlete who gets hooked on the pain pills he was prescribed for a sports injury. It affects the grandmother with chronic pain issues. The faces of this epidemic are our children, our friends, our neighbors,” Adams wrote.

An anesthesiologist, Adams was an assistant professor at the Indiana University School of Medicine.

Dr. Georges Benjamin, executive director of the American Public Health Association, said Adams “has extensive experience in health care and has worked on the front lines of public health in Indiana and his status as a working physician will serve him well in leading our nation’s health promotion and disease prevention efforts.”

Adams succeed Dr. Vivek Murthy, a holdover from the Obama administration who resigned in April after helping during the transition between the two administrations.

Adams will also serve as medical director in the Regular Corps of the Public Health Service.

Comment “Congrats!” below if you think Dr. Adams was a good choice.