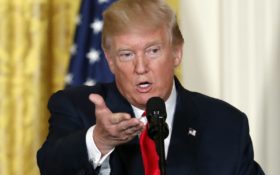 President Donald Trump said Tuesday that “all options are on the table” in terms of a U.S. response to North Korea’s launch of a missile over Japan.

In a terse, written statement Tuesday, Trump said that with the missile launch North Korea has “signaled its contempt for its neighbors, for all members of the United Nations, and for minimum standards of acceptable international behavior.”

“Threatening and destabilizing actions only increase the North Korean regime’s isolation in the region and among all nations of the world,” Trump said. “All options are on the table.”

Trump later told reporters, “We’ll see, we’ll see” when asked what he would do about North Korea. Trump, accompanied by first lady Melania Trump, was departing the White House for a trip to survey storm damage in southeast Texas.

In a first, North Korea on Tuesday fired a midrange ballistic missile designed to carry a nuclear payload that flew over U.S. ally Japan and splashed into the northern Pacific Ocean, officials said. The aggressive launch over the territory of a close U.S. ally sent a clear message of defiance as Washington and South Korea conduct war games nearby.

Trump’s statement implies that military action remains an option in resolving the standoff over North Korea’s development of nuclear weapons that could threaten America. But a U.S. military strike against North Korea is considered highly unlikely. Even Trump’s own strategic adviser, Steve Bannon, dismissed the threat as a bluff shortly before he was dismissed earlier this month.

North Korea has the world’s largest standing army and a massive conventional weapons arsenal that can easily target the South Korean capital of Seoul and its metropolitan area of about 25 million people.

While Democrat and Republican presidents have routinely offered the “all options on the table” formulation, U.S. officials have long assessed that the North would likely respond to any U.S. strike by attacking its neighbor or nearby Japan. The result could be a war with the risk of mass casualties on both sides. Hundreds of thousands of Americans in Northeast Asia, military and civilians, would be endangered.

In recent weeks the administration has been emphasizing it wants to use economic and diplomatic pressure to achieve a negotiated solution.

Trump and Prime Minister Shinzo Abe of Japan conferred by telephone over the latest missile test.

The White House said the leaders agreed that North Korea poses “a grave and growing direct threat” to the United States, Japan, South Korea and countries around the world.

“President Trump and Prime Minister Abe committed to increasing pressure on North Korea, and doing their utmost to convince the international community to do the same,” the White House said.

Abe said in a statement that “Japan’s and the U.S. positions are totally at one.”

The prime minister added that both nations were in “total agreement” that an emergency meeting was needed at the U.N. Security Council to step up pressure on North Korea after what he called an unprecedented threat. He also said Trump expressed his “strong commitment” to defending Japan.

It also followed a series of missile launches late Friday, and came after a period in which the U.S. and North Korea had traded heated rhetoric over Pyongyang’s continued missile tests, which violate U.N. Security Council resolutions prohibiting them.

Trump last week praised North Korea’s decision to back down from its earlier threats to attack the U.S. territory of Guan.

“But, Kim Jong Un, I respect the fact that I believe he is starting to respect us,” Trump said at a campaign rally last week in Phoenix. “I respect that fact very much. Respect that fact. And maybe, probably not, but maybe something positive can come about.”

Secretary of State Rex Tillerson had also complimented North Korea for its restraint in recent weeks.