Trump's tax plan – What it means for you - The Horn News 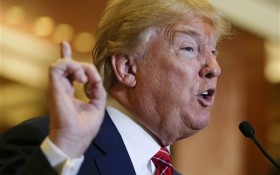 Republican presidential front-runner Donald Trump unveiled a tax plan Monday that would cut rates across the board, including totally eliminating taxes on some Americans.

The plan, which Trump said would “provide major tax relief for middle-income and for most other Americans,” comes with Trump’s assurances it would not increase the national debt.

“There will be a major tax reduction,” Trump said at a news conference at his Trump Tower skyscraper in Manhattan. “It’ll simplify the tax code. It’ll grow the American economy at a level that it hasn’t seen for decades, and all of this does not add to our debt or our deficit.”

The plan Trump unveiled proposes eliminating income taxes entirely for millions of single Americans earning less than $25,000 and married couples earning less than $50,000 a year. Individuals would receive a new one-page form to send the IRS saying, “I win.”

Wealthier Americans would also see large reductions in their annual tax bill. Under Trump’s four-bracket plan, the highest marginal tax rate would be cut from the current 39.6 percent to 25 percent.

Businesses — from major corporations to mom-and-pop shops — would also see their rates slashed to no more than 15 percent, down from the current corporate tax rate of 35 percent. Trump also said he would eliminate the estate tax.

The billionaire real estate mogul said he plans to pay for the tax cuts by eliminating and reducing unspecified deductions and loopholes, both on the “very rich” and corporations. He also wants to eliminate the so-called carried interest loophole that allows managers of hedge funds and private equity firms to pay a lower tax rate than most individuals.

“In other words, it’s going to cost me a fortune,” Trump said.

Kyle Pomerleau, an economist at the Tax Foundation, which advocates for lower rates, said Trump’s tax cuts are far larger than those proposed by any other Republican candidate and could easily cost more than $7 trillion over the next decade. That’d be double the cost of the proposal from former Florida Gov. Jeb Bush.

“It looks mostly like Bush’s plan, except it is a much, much larger tax cut,” Pomerleau said. “The Trump tax cut is bigger than what we’ve seen so far from Republican candidates.”

Trump said the changes he wants to make to the U.S. tax code would not add to the annual federal budget deficit and the overall national debt, in part because his plan would bring in new sources of revenue to the Treasury.

Among them: a one-time tax of 10 percent on money corporations are holding overseas that is brought back to the U.S, and the elimination of the ability of companies to defer taxes on income earned overseas. Estimates peg the amount of money U.S. firms have overseas at more than $2 trillion, although Trump said he believes the figure is far higher.

Trump also predicted his plan would “create tremendous numbers of jobs” and spark the economy to grow at least 3 percent a year, and as much as 5 or 6 percent. “We’re going to have growth that will be tremendous,” he said.

Trump said he would couple his tax plan with savings from cutting wasteful government spending, by renegotiating trade deals and demanding reimbursement from America’s allies for the cost of U.S. military protection. He vowed his administration “will be balancing budgets and getting them where they should be.”

The Congressional Budget Office projects this fiscal year’s federal deficit will be $426 billion, meaning Trump would need to find that much in potential spending cuts if his tax plan was revenue-neutral in order to balance the budget.

“We are reducing taxes, but at the same time if I win, if I become president, we will be able to cut so much money and have a better country,” he said.