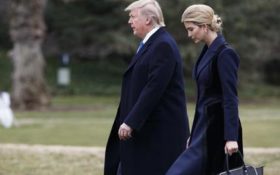 As president, Donald Trump promised he would do more for our veterans — and Wednesday’s secret trip to help a Gold Star family honor the returning remains of a U.S. Navy SEAL killed in a weekend raid in Yemen proved it.

Chief Special Warfare Operator Ryan Owens, a 36-year-old from Illinois, was the first known U.S. combat casualty since Trump took office less than two weeks ago. More than half a dozen Islamic terrorists were also killed in the raid on an Al Qaeda compound and three other U.S. service members were wounded.

Trump’s trip to Delaware’s Dover Air Base was shrouded in secrecy. The president and his daughter, Ivanka, departed the White House in the presidential helicopter with their destination unannounced. A small group of journalists traveled with Trump on the condition that the visit was not reported until his arrival.

Marine One landed at Dover shortly before a C-17 believed to be carrying Owens’ remains touched down. The president met with Owens’ family during a two-hour visit to the base. The sailor’s family had requested that Trump’s visit and the return of Owens’ remains be private.

Owens joined the Navy in 1998 and was the recipient of two Bronze stars, a Joint Service Commendation and an Afghanistan Campaign Medal, among other honors. In a statement following his death, the Navy Special Command called Owens a “devoted father, a true professional and a wonderful husband.”

His death underscores the human costs of the military campaigns Trump now oversees. Sunday’s pre-dawn raid – which a defense official said was planned by the Obama administration but authorized by Trump – could signal a new escalation against Islamic extremist groups in Yemen.

As president, Trump has promised to do everything in his power to wipe radical Islamic terrorism from the globe, and vowed to be tougher on the Islamic State. Last week, Trump gave the Pentagon and other agencies 30 days to submit a plan for defeating the Islamic State.