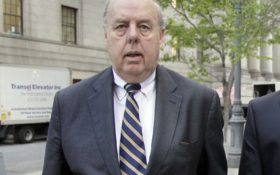 President Donald Trump’s lead lawyer in the special counsel’s Russia investigation has resigned amid a shake-up of the president’s legal team.

Attorney John Dowd confirmed his decision in an email Thursday to The Associated Press, saying, “I love the President and wish him well.”

Dowd’s departure comes three days after the Trump legal team added a new lawyer, former U.S. attorney Joseph diGenova, who has alleged on television that FBI officials were involved in a “brazen plot” to exonerate Hillary Clinton in the email investigation and “frame” Trump for nonexistent crimes.

It already was a delicate time in special counsel Robert Mueller’s investigation as Trump’s attorneys have been negotiating with Mueller over the scope and terms of an interview of the president. Trump has told reporters that he was eager to speak with Mueller, but Dowd has been far more apprehensive, and the lawyers have not publicly committed to making the president available for questioning.

Over the weekend, Dowd issued a statement calling for an end to special counsel’s investigation. The White House and later Dowd had to clarify the statement, saying the president’s legal team wasn’t calling for Mueller to be fired.

“John Dowd is a friend and has been a valuable member of our legal team. We will continue our ongoing representation of the President and our cooperation with the Office of Special Counsel,” Sekulow said.

This is at least the second major reshuffling of Trump’s legal team in the last year. Dowd had taken over the lead lawyer role last summer from New York attorney Marc Kasowitz, who has long been by Trump’s side.