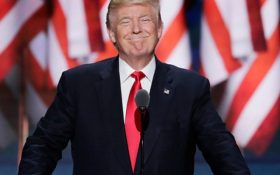 Democrats are celebrating a victory over President Donald Trump after the 9th Circuit Court of Appeals ruled unanimously to uphold a lower court ruling suspending the president’s travel ban’s enforcement.

But it’s Trump that could get the last laugh. There’s an effort by conservative lawmakers — led by a vocal Trump rival — to permanently break apart the liberal court.

It’s been in the works for over a month… and it’s led by Arizona Sen. John McCain.

The federal appeals court has long been ridiculed by conservatives as the “nutty 9th” or the “9th Circus.”

No one familiar with the 9th Circuit Court of Appeals should be surprised at today’s ruling. The 9th Circuit has a well-earned reputation for being presumptively reversible,” South Carolina Rep. Trey Gowdy said.

According to The Daily Caller, over 80% of the appeal court’s rulings have been overturned when challenged in front of the Supreme Court.

Covering a huge swath of territory — nine western states plus Guam — the San Francisco-based court handles far more cases than any other federal appeals court, including some rulings that have invoked furor from conservatives over the years. Among them: finding that the phrase “under God” in the Pledge of Allegiance is unconstitutional and ruling that states can force Christian pharmacies to sell abortion pills.

Now, “a Republican push to split up the controversial court — and shrink its clout — is gaining steam on Capitol Hill,” Fox News reported Thursday. “Republican Sens. Jeff Flake and John McCain of Arizona introduced legislation last month to carve six states out of the San Francisco-based court circuit and create a brand new 12th Circuit. They argue that the 9th is too big, too liberal and too slow resolving cases. If they succeed, only California, Oregon, Hawaii and two island districts would remain in the 9th’s judicial fiefdom.”

This isn’t the only such bill aimed to take down the “nutty” 9th, either.

A House version previously introduced by Reps. Andy Biggs and four other Arizona Republican representatives would leave Washington in the 9th Circuit.

In a news release, Biggs said his aim was “to free Arizona from the burdensome and undue influence of the 9th Circuit Court.”

“As a promise to my constituents last year, I introduced this bill to protect Arizona from a federal circuit court that does not reflect the values nor laws of our state,” he said. “The Ninth Circuit cannot handle the number of states currently entrapped within its jurisdiction, causing access to justice to be delayed.”