Trump's next U.N. ambassador is... - The Horn News 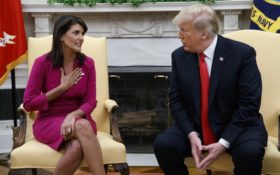 On Tuesday, President Donald Trump gave reporters on Air Force One the inside scoop on who is on his short list of potential replacements for outgoing United Nations Ambassador Nikki Haley.

After announcing her resignation for the end of the year, Trump said he would name her successor in the next few weeks, and many Americans began speculating over who would fill Haley’s shoes.

According to Fox News, the president has narrowed down Haley’s successor to a list of five people — and revealed that one of the names of his list includes former deputy national security adviser Dina Powell.

Trump told reporters that, “we have actually many names. … Nikki is going to help us with the choice. I’ve heard a lot of names.” They’re all strong “America First” believers.

Among those names is Powell, who left the White House in January and is now working at Goldman Sachs as a managing director.

Trump also said that, “Rick Grenell is someone I would consider,” referring to the U.S. ambassador to Germany. The president added that Grenell was not on his short list of five, though.

Sources have also claimed that U.S. Ambassador to Russia Jon Huntsman and Acting Under Secretary for Public Diplomacy and Public Affairs Heather Nauert are names floating around as possible replacements.

Haley on Tuesday surprised her staff, and many Americans when she announced that she would be resigning from her post. She said, “I have given everything I’ve got these last eight years,” she said, referring to her six years as South Carolina governor as well as her time at the U.N. “And I do think it’s good to rotate in other people who can put that same energy and power into it.”

Shortly after her announcement, Trump claimed there “are a number of people who would like to do it,” and that his daughter, Ivanka Trump would be “dynamite” in the role.

Ivanka took to Twitter later that day to remove herself from considerations, saying, “the President will nominate a formidable replacement for Ambassador Haley. That replacement will not be me.”

It is an honor to serve in the White House alongside so many great colleagues and I know that the President will nominate a formidable replacement for Ambassador Haley. That replacement will not be me.

Who would you like for President Donald Trump to pick as Nikki Haley’s successor? Vote below —

Who do you want Donald Trump to name as Nikki Haley's successor?