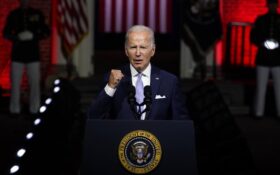 President Joe Biden unleashed on Trump voters in a prime-time address that attacked the alleged “extreme ideology” of the former president had his supporters. Biden called Republican voters a threat to”the very foundation of our republic,” as he summoned Americans of all stripes to help counter what he labeled as dark forces within the Republican Party trying to destroy democracy.

Former White House press secretary Kayleigh McEnany, who served in the Trump administration from April 2020 to January 2021, had something to say in response — and her clever comebacks went viral on social media.

“Too much of what’s happening in our country today is not normal,” Biden said before a small audience in front of Independence Hall in Philadelphia, raising his voice over a crowd of pro-Trump hecklers outside the building where the nation’s founding was debated.

“There’s no question that the Republican Party today is dominated by Donald Trump and the MAGA Republicans,” using the acronym for Trump’s “Make America Great Again” campaign slogan.

The explicit effort by Biden to marginalize Trump and his followers marks a sharp recent turn for the president, who claimed he would bring about national unity in his Inaugural address.

Biden, emboldened by his party’s summertime legislative wins and wary of Trump’s return to the headlines, has sharpened his divisive political attacks, last week likening MAGA voters to “semi-fascism.”

Mr. Unity just gave the most divisive presidential speech I have ever seen!

Standing in front of a hellish red background Biden called half the country, the MAGA Republicans "threats" & "clear and present dangers"

Then he says, “empathy is the fuel of democracy-the willingness to see each other not as enemies but as fellow Americans…”!!!

RIGHT BEFORE he says "I'm an American President — not of Red America or Blue America."

Who staged this? Who wrote this?

McEnany wasn’t alone in condemning the speech. Delivering a preemptive rebuttal from Scranton, Pennsylvania, where Biden was born, House Republican leader Kevin McCarthy said it is the Democratic president, not Republicans, trying to divide Americans.

Iowa GOP chair Jeff Kaufman said in a statement that Biden was using the tactics of an authoritarian regime, “trying to turn his political opponents into an enemy of the state.”

Trump plans his own rally this weekend in the Scranton area.

Biden’s appearance was promoted as an official presidential event, and despite being a political rally it was paid for by tax dollars. Most the major broadcast television networks did not carry the address live.