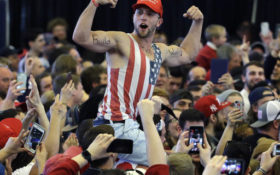 Since being sworn into office, Kelly has gotten to work doing just that.

Given the tools to enforce law and order on United States’ Southern border, the positive statistics DHS is already reporting has stunned security experts.

“Today, U.S. Customs and Border Protection is releasing illegal border crossing data through the month of February and the numbers show an unprecedented decline in traffic. From January to February, the flow of illegal border crossings as measured by apprehensions and the prevention of inadmissible persons at our southern border dropped by 40 percent,” Kelly said in a statement, released Wednesday.

That is the lowest total in five years — and the results have been achieved in just a single month.

South of the border, the news has smugglers and drug cartels furious.

According to the DHS report, “coyotes” — a nickname for human traffickers paid to transport criminal illegals over the U.S. border — have begun demanding over 130% more for their services. In some mountainous regions, they’re reportedly charging up to $8,000 because of the increased risks.

Additionally, experts say the increased difficulty of border crossing is assumed to have greatly slowed the flow of deadly drugs from Mexico to U.S. cities.

Can you imagine how far it will drop once Trump builds the border wall?

I am reading that the great border WALL will cost more than the government originally thought, but I have not gotten involved in the…..

…design or negotiations yet. When I do, just like with the F-35 FighterJet or the Air Force One Program, price will come WAY DOWN!