Trump's next Chief of Staff could be... WHO!? - The Horn News 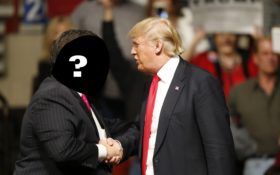 President Donald Trump’s hunt for a new chief of staff has taken a turn no one expected — and Thursday he met with one of the most unlikely of candidates.

No leading name has emerged in the days since Trump’s preferred candidate to replace John Kelly bowed out. On social media, British journalist Piers Morgan suggested he would be a good fit in an op-ed for “The Daily Mail,” while former major league slugger Jose Canseco tweeted his interest to Trump.

But when former New Jersey Governor Chris Christie met with Trump on Thursday about the job, it surprised many political insiders.

Trump said Thursday that the process is moving along, and says he’s narrowed the number down to five (presumably including Christie).

Trump himself likes to feed the drama, dropping hints about the number of candidates in the running and bantering with journalists about who wants the job.

The president’s hunt for a new chief reverted to square one over the weekend when Nick Ayers, Vice President Mike Pence’s chief of staff, took himself out of the running and decided that he would better serve the president by running his Super PAC. The announcement surprised even senior staffers who believed that Ayers’ ascension was a done deal.

Besides Christie, Trump has turned to a list of other candidates that was said to include Office of Management and Budget Director Mick Mulvaney and Rep. Mark Meadows, R-N.C., the chairman of the conservative House Freedom Caucus.

Other possible options mentioned were U.S. Trade Representative Robert Lighthizer and Treasury Secretary Steven Mnuchin, though both have said they were happy in their current roles.

By Wednesday, Meadows was out of the running, with the White House saying Trump thinks he is needed in Congress.

The breadth of speculation provided on-camera time for many to discuss the speculation. Bossie called it “humbling” to be considered while acknowledging that he did not know if it was a serious list of names. Former Pennsylvania Sen. Rick Santorum said on CNN that he would decline the job if offered, though it was never clear he was a serious contender.

A time frame for a decision remained uncertain, with some speculation about the possibility of two people taking over the responsibilities of the chief of staff. And Trump made clear in an interview with Fox News on Thursday that he was still soliciting advice.

Could that idea land Christie as the top White House cabinet member?