Trump's next Attorney General will be... - The Horn News 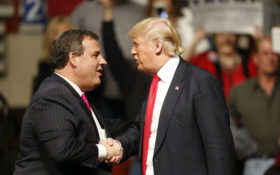 Until now, Christie’s personal relationship with the president has not led to professional possibilities in the administration, though he has been in the mix for a number of administration jobs since Trump was elected.

Christie spoke Wednesday at Fairfield University just hours after Sessions was fired by President Donald J. Trump, and said Sessions’ departure was not surprising in the wake of the midterms, when Democrats captured control of the House.

“It’s amazing it took that long,” Christie said. “It’s obvious that Jeff and the president have not been getting along for quite some time. So I think it was really just a matter of the two of them agreeing they didn’t want this to be a distraction before the midterms.

“Now that the midterms are over, the president is going to reassemble his cabinet and this is the first one, I doubt it will be the last one. I think this was the most predictable one. I think everyone kind of knew Jeff Sessions tenure was going to end around the two year mark,” he added.

Sessions delivered his resignation letter to the White House at the request of the president, who tapped Sessions Chief of Staff, Matthew G. Whitaker, as acting attorney general. Sessions’ resignation and Whitaker’s reputation as a loyalist immediately raised questions about the future of the Russia probe led by the special counsel, Robert S. Mueller.

Christie, a former prosecutor and U.S. attorney general for New Jersey, said Wednesday he believes the investigation should continue.

“I believe Mueller, his independence needs to be preserved,” Christie said. “He needs to be permitted to finalize his investigation, bring whatever remaining charges he needs to bring, file a report with the attorney general’s office and let the public see it, and then let’s move on from this.”

Christie said he does not believe the president will end the special counsel’s investigation, adding that he believes if the investigation were going to be shut down, it would have happened already.

“Remember something about President Trump,” Christie said. “He has an exquisite sense of self preservation. He knows how far he can go without endangering himself or his political ability to operate. He will not fire Bob Mueller. He has not fired him. It isn’t because it hasn’t crossed his mind. It is because he has decided that to do so would inflict such a political cost on him and his party that it’s just not sustainable.”

“It’s going to be over soon and the stupidest thing to do at this point would be to fire Bob Mueller, and I just don’t think he’ll do it because in the end he knows it’s the wrong thing to do and because he knows Republicans in the Senate will not not support him on that,” Christie added.

Christie, who served as a U.S. Attorney in New Jersey from 2002 to 2008, completed his second term as the governor of New Jersey in January 2018. Since then, he has worked as an ABC News contributor.

He has long had a personal relationship with the president, which he detailed Wednesday, and endorsed Trump after dropping out of the 2016 presidential campaign. Trump appointed Christie as chairman of the President’s Commission on Combatting Drug Addiction and the Opioid Crisis in the spring of 2017.