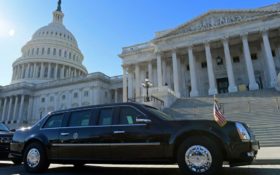 When President Donald Trump took office last year, many expected that he would be presented with the keys to a new version of the presidential limousine.

Instead, Trump kept the fleet that debuted on former President Barack Obama’s first Inauguration Day in 2009.

Observers did not know that Trump was in the process of having an entirely new fleet made — but now with the unveiling around the corner, we have a sneak peek of how the “Beast” will look.

Several prototypes of the Cadillac-branded state car have been roaming the streets wrapped in black and white camouflage to hide their specific details from photographers.

According to Fox News, “At least one of the dozen or so vehicles that General Motors is set to build under a $15.8 million contract is now with the U.S. Secret Service.”

A spokeswoman for the U.S. Secret service added, “The program to build and deploy the next generation of Presidential limousines is on track and on schedule — both in terms of vendor production and internal Secret Service post production requirements. The public can expect to see the new vehicles put into operational use late summer of this year.”

That means Trump will be seen roaming the streets in his new “Beast” in the next few months.

Trump’s new fleet is reportedly set to be more of an armored truck than a luxury sedan, although the exact details of the vehicles are a closely kept a national security secret.

“While obscured by the camouflage, the new one appears to have styling elements similar to Cadillac’s flagship CT6 sedan,” reports Fox News.

The CT6 features hands-free driving on the highways, which is one feature Trump’s vehicles will not share.

Cadillac has been building presidential limousines since 1993, and did not face any competition this time around.

The president of the company explains that he finds it an honor to help chauffeur the country’s most powerful man around.

“It’s always been part of our heritage and tradition, we have transported presidents over time, and we hope to be able to do so in the future, as well,” de Nysschen added.