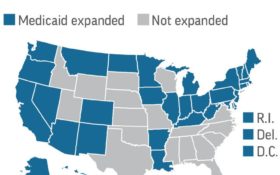 In an ironic twist, the Trump administration’s embrace of work requirements for low-income people on Medicaid is prompting lawmakers in some conservative states to resurrect plans to expand health care for the poor.

Trump’s move has been widely criticized as threatening the Affordable Care Act’s Medicaid expansion. But if states follow through, more Americans could get coverage.

“I think it gives us a chance,” said Kansas state Rep. Susan Concannon, a moderate Republican who pushed unsuccessfully for Medicaid expansion last year in her state.

In Utah, the office of Republican Gov. Gary Herbert said the Trump administration’s willingness to approve work requirements is one of several concessions the state would demand to cover more poor residents through Medicaid.

Utah state Rep. Robert Spendlove, a Republican working on legislation to partially expand Medicaid, said the Trump administration has sent a positive sign. “I have a lot of confidence that they will be willing to work with us and approve this,” Spendlove said.

There’s already an economic argument for states to expand Medicaid, since it translates to billions of federal dollars for hospitals and medical service providers. But Republican Mike Leavitt, a former U.S. health secretary and Utah governor, said the ability to impose work requirements adds an ideological motivator.

“Republicans want Medicaid to help people who are doing their best to become self-sufficient but need temporary help to get there,” said Leavitt, who now heads a health care consulting firm.

Medicaid is a federal-state collaboration originally meant for poor families and severely disabled people. Over the years, it’s grown to become the largest government health insurance program, now covering 1 in 5 people. Overall, Americans have a favorable view of the program, and oppose funding cuts.

But 18 mostly conservative states are still holding out. They include population centers such as Texas, Florida, North Carolina and Virginia — where newly installed Democratic Gov. Ralph Northam has vowed to cajole a closely divided legislature into expanding Medicaid.

For the first time in the program’s half-century, the Trump administration recently announced it will approve state proposals requiring “able-bodied adults” to work, study, or perform some kind of service. Officials promptly signed off on Kentucky’s work requirement plan.

“There are both political and legal challenges, but as long as it is optional for states, and appropriately thoughtful and nuanced … this can definitely work,” said Matt Salo, executive director of the nonpartisan National Association of Medicaid Directors. “It could possibly mean the difference between some of the non-expansion states embracing the expansion, or at least ensuring that some of the expansion states maintain political support for the program.”

His organization, which represents state officials, does not have a consensus on work requirements.

Another carrot for reluctant states is the repeal of the health law’s requirement that most people carry health insurance. Congressional Republicans repealed the “individual mandate” in the tax bill, and President Donald Trump signed it into law. For states, it means that fewer residents may sign up for expanded Medicaid, trimming potential costs. Although states pay no more than 10 percent, that’s still a significant impact on their budgets, which generally must be balanced each year.

Advocates for low-income people say such arguments for work requirements are misguided. They contend Medicaid is a health care program and such requirements run contrary to its legally established purpose.

“I don’t see this as necessarily creating the opportunity for states to expand or stay in the expansion,” said Judy Solomon of the Center on Budget and Policy Priorities, which advocates for the poor. “I think what is really important to point out is how this undermines the expansion.”

Nonetheless polls show strong support for requiring “able-bodied” adults on Medicaid to work, said Robert Blendon of the Harvard T.H. Chan School of Public Health. Most of those adults already do.

“People are much more sympathetic to the idea of helping low-income people who work,” said Blendon, who tracks opinion trends on health care.

While the Trump administration’s actions have shifted the politics of Medicaid expansion, Missouri Hospital Association president Herb Kuhn said he doesn’t see opposition in his state crumbling quickly. His group was unable to convince lawmakers, even though hospitals that would benefit from expansion are major employers in local communities.

“It’s not a slam dunk, but I think there is a fair conversation,” said Kuhn. “In states that were already leaning in for expansion, this might be something that helps re-energize the conversation.”