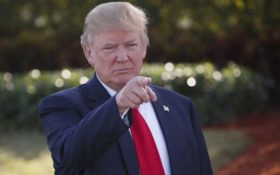 President Donald Trump’s political mastermind has revealed how the administration is already on the verge of achieving one of its top goals… and it’s coming as a HUGE shock to the establishment in Washington, D.C.

That’s because, unlike other politicians, Trump’s Number One priority now that he’s in the White House is to KEEP his promises!

Career politicians are finding this hard to believe, since they’ve built their careers on saying one thing and doing another.

But Steve Bannon, Trump’s chief strategist and architect of his stunning comeback victory in November, revealed in a rare discussion at CPAC last week that the president’s entire Cabinet was built with one mission in mind.

It’s what he calls the “deconstruction of the administrative state.”

That makes perfect sense given Trump’s vow to take a government that’s supposed to be OF the people, BY the people and FOR the people… and give it back TO the people!

The goal is to reduce, remove and even ELIMINATE the monstrous federal bureaucracy that has forgotten the very people it exists to serve.

Or, as Trump would put it: “Drain the swamp.”

The establishment has become a massive machine that exists to raise huge sums of cash to support itself and force cumbersome regulations struggling American businesses.

That’s about to come to an end.

“If you look at these Cabinet appointees, they were selected for a reason and that is the deconstruction, the way the progressive left runs, is if they can’t get it passed, they’re just gonna put in some sort of regulation in – in an agency,” he said. “That’s all gonna be deconstructed and I think that that’s why this regulatory thing is so important.”

The State Department cleaned house last month, with a massive purge of career bureaucrats and reorganizing the ones left.

Instead of another bloated federal bureaucracy filled with do-nothing gigs for overpaid political hacks, the agency is actually forcing employees to get work done.

The left has also been throwing an absolute fit over Scott Pruitt, who as Oklahoma’s attorney general practically made a career out of suing the pants off the Environmental Protection Agency.

Pruitt has been an absolute thorn in the agency’s side, suing them at least 14 times to demand consistency and accountability.

“I think people across this county look at the EPA much as they look at the IRS,” he said at CPAC and said people who want to completely eliminate the agency are “justified.”

Pruitt’s vowing swift change, and last week… immediately after being confirmed to the office… he warned employees the time of regulatory “abuse” is OVER.

Same goes for former Texas Gov. Rick Perry. Liberals have openly MOCKED him for once forgetting the agency’s name when promising to eliminate it during his short-lived presidential campaign.

But seen in this new context… that he wasn’t brought on to LEAD so much as to PRUNE… the choice makes a lot more sense, doesn’t it?

Across the board, Trump has tapped leading critics of the nation’s massive bureaucracies and put them in charge of the very agencies they’ve been fighting.

In other words, the “deconstruction of the administrative state” — Trump’s plan to drain the swamp — is already under way.